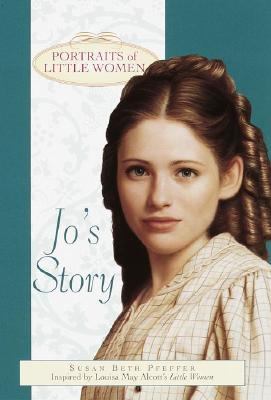 CHAPTER 1 "Josephine! Josephine March!" Jo March sighed and turned to face Aunt March. Only Aunt March called her Josephine, and only Aunt March used that tone of voice with her. "Yes, Aunt March?" she asked. "What is that book in your hand?" Aunt March demanded. "It's Oliver Twist, Aunt," Jo replied. "By Charles Dickens." "I know who wrote Oliver Twist, young lady," said Aunt March. "That book came off my shelves, did it not?" "Yes, Aunt March," Jo said. Aunt March's library was the best thing about visiting her great-aunt. Actually, Aunt March's library was the only thing Jo enjoyed about visiting her great-aunt. But visit she must, or so her parents said. "Oliver Twist is not suitable reading matter for a child," proclaimed Aunt March. "Put it back on the shelves." "But Father reads Dickens to us all the time," Jo said. "He's read us David Copperfield and Little Dorrit and A Christmas Carol. The Pickwick Papers is my favorite book of all. But I've never read Oliver Twist, and I've always wanted to. Please let me borrow it." "Perhaps your father agrees with me that Oliver Twist is unsuitable for such a young girl," said Aunt March. "I'm not so young," Jo said. "I'm ten already." "And a rude young girl, at that," Aunt March declared. "I sometimes wonder what kind of manners your parents are teaching you." "Father and Marmee are the best parents in the world," said Jo angrily. "Don't you speak against them." "And don't you use that tone with me, young lady," Aunt March said. "Have your parents never taught you to respect your elders?" "Of course they have," Jo said. "Then the fault must lie with you and not them," said Aunt March, "for I'm sure you're showing me no respect at all." Jo could have kicked herself. All she wanted was to get this visit over with as fast as she possibly could. That meant not quarreling with Aunt March. Jo had simply become so excited when she'd found the copy of Oliver Twist, she'd forgotten her mission of getting in and out in a half hour's time. "I'm sorry, Aunt March," said Jo, and she was sorry--sorry she'd aroused Aunt March's wrath, since it meant she'd be there for at least another ten minutes and would probably go home without the precious Dickens volume to read. "I will never understand why you can't be more like your sister Margaret," said Aunt March. "Now, there's a girl your parents can be proud of. She's every inch a lady." "Yes, Aunt March," Jo said. She tried to hide the copy of Oliver Twist in the folds of her skirt. "Meg is a lady." "You could learn something from your sister Beth as well," said Aunt March. "Quiet as a church mouse and never causing any trouble." "Yes, Aunt March," Jo said. "Even little Amy could teach you a thing or two," said Aunt March. "She is such a darling child, so pretty and artistic. Not at all the sort of child who talks back." "Yes, Aunt March," Jo said for what felt like the hundredth time. Of course Aunt March had a point. Meg was a lady--always polite, always willing to help others. Beth was a dear, sweet and kind--everyone loved her. Amy was pretty and artistic, and even if she drove Jo to distraction, she was the sort of child Aunt March would favor. And Jo was just the sort of girl that Aunt March would want to improve. Jo was sharp-tongued, quick-tempered, and boyish. "I suppose your parents have done as good a job as they could raising you girls, having so little money and so many ideals," Aunt March declared. "Pfeffer, Susan Beth is the author of 'Jo's Story - Susan Beth Beth Pfeffer - Paperback' with ISBN 9780440413486 and ISBN 0440413486.

4 from $0.94
Loading marketplace prices 4 copies from $0.94 How does the rental process work?
View more