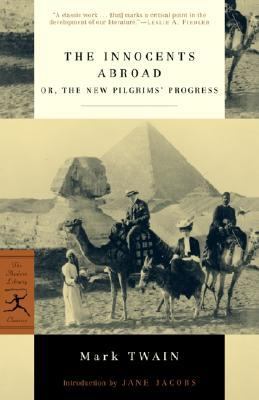 Chapter 1 For months the great Pleasure Excursion to Europe and the Holy Land was chatted about in the newspapers every where in America, and discussed at countless firesides. It was a novelty in the way of Excursionsits like had not been thought of before, and it compelled that interest which attractive novelties always command. It was to be a picnic on a gigantic scale. The participants in it, instead of freighting an ungainly steam ferry-boat with youth and beauty and pies and doughnuts, and paddling up some obscure creek to disembark upon a grassy lawn and wear themselves out with a long summer day's laborious frolicking under the impression that it was fun, were to sail away in a great steamship with flags flying and cannon pealing, and take a royal holiday beyond the broad ocean, in many a strange clime and in many a land renowned in history! They were to sail for months over the breezy Atlantic and the sunny Mediterranean; they were to scamper about the decks by day, filling the ship with shouts and laughteror read novels and poetry in the shade of the smoke-stacks, or watch for the jelly-fish and the nautilus, over the side, and the shark, the whale, and other strange monsters of the deep; and at night they were to dance in the open air, on the upper deck, in the midst of a ball-room that stretched from horizon to horizon, and was domed by the bending heavens and lighted by no meaner lamps than the stars and the magnificent moondance, and promenade, and smoke, and sing, and make love, and search the skies for constellations that never associate with the "Big Dipper" they were so tired of; and they were to see the ships of twenty naviesthe customs and costumes of twenty curious peoplesthe great cities of half a worldthey were to hob-nob with nobility and hold friendly converse with kings and princes, Grand Moguls, and the anointed lords of mighty empires! It was a brave conception; it was the offspring of a most ingenious brain. It was well advertised, but it hardly needed it: the bold originality, the extraordinary character, the seductive nature, and the vastness of the enterprise provoked comment every where and advertised it in every household in the land. Who could read the programme of the excursion without longing to make one of the party? I will insert it here. It is almost as good as a map. As a text for this book, nothing could be better: EXCURSION TO THE HOLY LAND, EGYPT, THE CRIMEA, GREECE, AND INTERMEDIATE POINTS OF INTEREST. Brooklyn, February 1st, 1867. The undersigned will make an excursion as above during the coming season, and begs to submit to you the following programme: A first-class steamer, to be under his own command, and capable of accommodating at least one hundred and fifty cabin passengers, will be selected, in which will be taken a select company, numbering not more than three-fourths of the ship's capacity. There is good reason to believe that this company can be easily made up in this immediate vicinity, of mutual friends and acquaintances. The steamer will be provided with every necessary comfort, including library and musical instruments. An experienced physician will be on board. Leaving New York about June 1st, a middle and pleasant route will be taken across the Atlantic, and passing through the group of Azores, St. Michael will be reached in about ten days. A day or two will be spent here, enjoying the fruit and wild scenery of these islands, and the voyage continued, and Gibraltar reached in three or four days. A day or two will be spent here in looking over the wonderful subterraneous fortifications, permission to visit these galleries being readily obtained. From Gibraltar, running along the coasts of Spain and France, Marseilles will be reached in three days. Here ample time will be given not only toTwain, Mark is the author of 'Innocents Abroad Or the New Pilgrims' Progress', published 2003 under ISBN 9780812967050 and ISBN 0812967054.