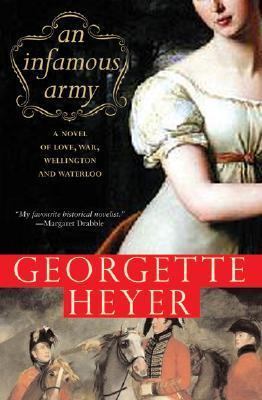 Excerpt from Chapter 1 The youthful gentleman in the scarlet coat with blue facings and gold lace, who was seated in the window of Lady Worth's drawing-room, idly looking down into the street, ceased for a moment to pay any attention to the conversation that was in progress. Among the passers-by, a Bruxelloise in a black mantilla had caught his eye. She was lovely enough to be watched the whole way down the street. Besides, the conversation in the salon was very dull: just the same stuff that was being said all over Brussels. 'I own, one can be more comfortable now that Lord Hill is here, but I wish the Duke would come!' The Bruxelloise had cast a roguish dark eye up at the window as she passed; the gentleman in scarlet did not even hear this remark, delivered by Lady Worth in an anxious tone which made her morning visitors look grave for a minute. The Earl of Worth said dryly: 'To be sure, my love: so do we all.' Georgiana Lennox, who was seated on the sofa with her hands clasped on top of her muff, subscribed to her hostess's sentiments with a sigh, but smiled at the Earl's words, and reminded him that there was one person at least in Brussels who did not wish for the Duke's arrival. 'My dear sir, the Prince is in the most dreadful huff! No other word for it! Only fancy! He scolded me for wanting the Duke to make haste-as though I could not trust him to account for Bonaparte, if you please!' 'How awkward for you!' said Lady Worth. 'What did you say?' 'Oh, I said nothing that was not true, I assure you! I like the Prince very well, but it is a little too much to suppose that a mere boy is capable of taking the field against Bonaparte. Why, what experience has he had? I might as well consider my brother March a fit commander. Indeed, he was on the Duke's Staff for longer than the Prince.' 'Is it true that the Prince and his father don't agree?' asked Sir Peregrine Taverner, a fair young man in a blue coat with very large silver buttons. 'I heard-' A plump gentleman of cheerful and inquisitive mien broke into the conversation with all the air of an incorrigible gossipmonger. 'Quite true! The Prince is all for the English, of course, and that don't suit Frog's notions at all. Frog, you know, is what I call the King. I believe it to be a fact that the Prince is much easier in English or French than he is in Dutch! I heard that there was a capital quarrel the other day, which ended with the Prince telling Frog in good round terms that if he hadn't wished him to make his friends among the English he shouldn't have had him reared in England, or have sent him out to learn his soldiering in the Peninsula. Off he went, leaving Papa and Brother Fred without a word to say, and of course poured out the whole story to Colborne. I daresay Colborne don't care how soon he goes back to his regiment. I would not be Orange's military secretary for something!' The Bruxelloise had passed from Lord Hay's range of vision; there was nothing left to look at but the pointed gables and nankeen-yellow front of a house on the opposite side of the street. Lord Hay, overhearing the last remark, turned his head, and asked innocently: 'Oh, did Sir John tell you so, Mr Creevey?' An involuntary smile flickered on Judith Worth's lips; the curled ostrich plumes in Lady Georgiana's hat quivered; she raised her muff to her face. The company was allowed a moment to reflect upon the imaginary spectacle of more than six feet of taciturnity in the handsome shape of Sir John Colborne, Colonel of the Fighting 52nd, unburdening his soul to Mr Creevey. Mr Creevey was not in the least abashed. He shook a finger at the young Guardsman, and replied with a knowing look: &aHeyer, Georgette is the author of 'Infamous Army ', published 2007 under ISBN 9781402210075 and ISBN 1402210078.