Incidents in the Life of a Slave Girl 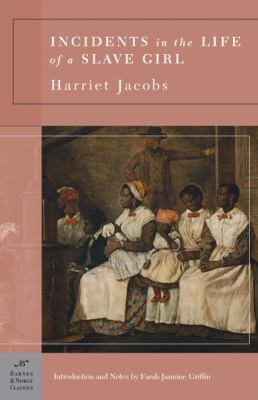 From Farah Jasmine Griffin's Introduction toIncidents in the Life of a Slave Girl In the closing pages of her now-classic narrative Harriet Jacobs writes: The more my mind had become enlightened, the more difficult it was for me to consider myself an article of property; and to pay money to those who had so grievously oppressed me seemed like taking from my sufferings the glory of triumph. As this sentence suggests,Incidents in the Life of A Slave Girlnot only is a record of the experience of a slave and her escape from slavery; it is also a document of the narrator's growing political consciousness about the system of American slavery. Although the book does not focus on the narrator's politicization, it is nonetheless a product of her movement from a general understanding of her persecution under slavery and the overall injustice of the system to a more activist orientation and devotion to social change. Nowhere is this movement more evident than in the first chapter, "Childhood." Jacobs writes: I was born a slave; but I never knew it till six years of happy childhood had passed away. . . . [My parents] lived together in a comfortable home; and, though we were all slaves, I was so fondly shielded that I never dreamed I was a piece of merchandise, trusted to them for safe keeping, and liable to be demanded of them at any moment." Jacobs's narrative opens as do many nineteenth-century slave narratives, with the phrase, "I was born a slave." The statement is immediately qualified with "but I never knew it." Here Jacobs initiates a trend in African-American letters: Frances Ellen Watkins Harper, W. E. B. Du Bois, James Weldon Johnson, and Zora Neale Hurston all present protagonists who do not recognize their status as slaves or, post-emancipation, as members of a degraded and despised race. By narrating her innocence in language that exposes a later understanding and critique of the institution of chattel slavery, Jacobs communicates a movement from innocence to knowledge, from naivete to political consciousness. By the time of the publication ofIncidents in the Life of a Slave Girl, the author had become a member of abolitionist circles in Rochester, New York, and a close personal friend of radical abolitionists Isaac and Amy Post. In fact, it was Amy Post to whom Jacobs eventually confided her personal history; the Quaker activist encouraged her to write her own narrative. At first reluctant to expose her sexual history, with the support of her daughter, Louisa Matilda, and her friend Amy Post, Jacobs agreed to write her narrative, and in so doing, issue a blow in the battle against slavery. Born in 1813, in Edenton, North Carolina, Jacobs lived for part of her childhood with her mother, Delilah, her father, Elijah, a carpenter, and her younger brother, John. The family lived close to Jacobs's stalwart grandmother, Molly, as well as Molly's other children. Molly's mistress, Mary Horniblow, made gifts of each of Molly's daughters to her own daughters: Delilah was given to the invalid Margaret Horniblow. Jacobs remembered her parents as "a shade of brownish yellow . . . termed mulattoes." She writes of her childhood as a happy and safe one. Upon the death of her mother, when Harriet was six years old, the child was sent to live with her mother's mistress, Margaret, and for the first time learned of her status as a slave. Margaret promised to care for her beloved slave's children. The young Miss Horniblow taught Harriet to read and to sew but failed to free her upon her own death. Instead, she willed the child to her three-year-old niece, Mary Matilda Norcom, the daughter of her sister, MJacobs, Harriet is the author of 'Incidents in the Life of a Slave Girl ', published 2005 under ISBN 9781593082833 and ISBN 1593082835.