Importance Of Being Earnest And Four Other Plays 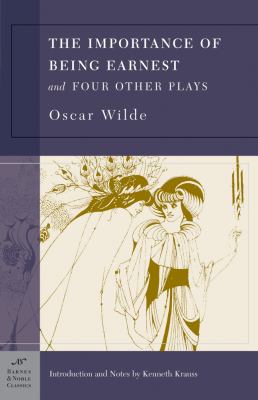 From Kenneth Krauss's Introduction toThe Importance of Being Earnest and Four Other Plays On a very immediate level,Earnestexplores the nature of the connection between a symbol and what it represents. Both Gwendolen and Cecily assert that they cannot marry men whose names are not Ernest. Their superficiality, however, may obscure the wordplay inherent in the name itself: The word "earnest" and the name "Ernest" sound exactly alike. Is it men who have not been arbitrarily assigned the name "Ernest" by their parents whom the girls reject, or is it perhaps men who are not in "earnest"? In the play itself, it would appear both girls are looking for Ernest, and yet what the name has come to represent for them is the honest and open--that is, the "earnest"--acknowledgment that their suitors are just what they say they are: attractive, stylish, and wicked men of the world. Missing is the outcast female from the earlier dramas: InEarnestnone of the female characters, neither Gwendolen nor Cecily, nor Lady Bracknell, and certainly not Miss Prism, have gone far beyond the boundaries that Victorian society had set up for ladies and young women. Curiously, however, their well-bred innocence includes an awareness of that underworld into which fallen women fall. Cecily's diary, written to describe her imaginary courtship with the nonexistent but immoral Ernest, suggests an attraction to what her elders characterize as sinful. Miss Prism fears lascivious content in Cecily's economics text. Still, if their lack of worldly experience appears slight, the women in Earnest have mastered the art of surfaces. Gwendolen's passion for Jack is based largely, perhaps completely, on his assumed name (and so, as we later learn, is Cecily's attraction to Algernon). Lady Bracknell, who may be regarded as a more terrifying version of the Duchess of Berwick or Lady Caroline Pontefract, becomes the epitome of upper-class snobbism: Her commands and judgments are based purely on how she anticipates she (or those around her) will be perceived by others. Her egocentricity is so enormous that her presence in a room makes young lovers quake. And yet her amazing and hilarious contradictions suggest there is little beyond the formidable facade. Lady Bracknell is merely a collection of other people's social prejudices. The men inEarnesthave devised tactics to protect themselves from the Lady Bracknells of the world. Masquerading as someone else, they manage to enter the demimonde of ill repute (or at least of pleasure). They manage to invent excuses (say, an uncontrollable brother or an invalid friend) that allow them to exit propriety and enter the gray area between good and bad, where they may enjoy themselves. The fopperies of Darlington and Illingworth, along with their mutual fascination with evil, are present in both Ernests. Yet Jack and Algernon are positive examples of young men-about-town who look upon upright Victorian morality with justified cynicism; like Goring, both seem capable of becoming husbands who, if not ideal, have been made better by their encounters in the shadier world. If the complicated yet improbable plot appears to carry minimal meaning, spectators must look elsewhere for substance. That little if anything seems to go deeper than the surface is in itself significant. InEarnestpeople act as if they have no concern with what lies beyond the way things look to others. The ironies that give the play much of its humor, then, resonate with the notion that these characters are inhabitants of a universe in which bizarre contradictions make perfect sense. Their obsession with how things appear, and their need to disguise their real and private lives, have shaped them. Here as in all else, the comedy assists the audience in gliding through the more searing social commentary. In the end, however, as the plWilde, Oscar is the author of 'Importance Of Being Earnest And Four Other Plays', published 2003 under ISBN 9781593080594 and ISBN 159308059X.