Ideology and the Development of Sociological Theory 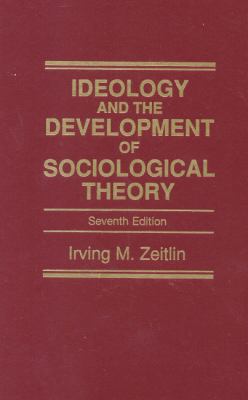 Preface More than thirty years ago I was inspired to demonstrate that the "classical tradition of sociological thinking" had developed in the course of a long and intense debate--first with the eighteenth-century Enlightenment, and later with its true heir in the nineteenth century, Karl Marx. It is not far from the historical truth to propose that the classical tradition began with the Enlightenment thinkers. For it was they who pioneered in studying the human condition in a methodical way, by employing scientific principles in the analysis of society. The Enlightenment thinkers upheldreasonas the criterion by which to assess social institutions and their suitability for human nature and needs. Human beings, they maintained, are essentially rational. Hence, by criticizing and changing repressive social institutions, humans could widen the boundaries of freedom and thus actualize their creative powers and perfect themselves. The philosophers of the Enlightenment were thereforecriticalas well as scientific. Their central premises--the rationality and pefectibility of humanity--eventually inspired the French revolutionaries; and soon after the Revolution, influential European thinkers, attributing the causes of that violent upheaval to Enlightenment ideas, sought to repudiate them. The response to the Enlightenment and to both the French and the Industrial Revolutions is treated by historians under the headings of Romanticism and the Conservative Reaction. This reaction constitutes an important stage in the development of social theory. For it was the Romantic-Conservatives who rejected the mechanistic metaphors of the Enlightenment and who replaced them with an organic conception of society and history. The response to the Industrial Revolution also gave rise to Positive Philosophy, the theories of Saint-Simon and Comte, the official founders of sociology. Later in the nineteenth century it was Karl Marx who coined the term "capitalism" to describe the new type of society that had emerged as a product of the Industrial Revolution. Marx, as the severest critic of the capitalist system, called attention to its alienating character. In presenting his critique of the system, Marx developed a highly fruitful historical-sociological approach to the study of society. Marx's contribution to sociological thinking stands out in the context of the late nineteenth century as possessing extraordinary intellectual significance. That is true, I believe, not only because of his own original ideas, but also because of the widespread response his ideas provoked, a response that accounts, in a large measure, for the character of Western sociology. My discussion of Marx is therefore followed by the intense debate with his "ghost," the Marxian legacy. In a series of chapters I present the ideas of several key participants in the debate--Weber, Pareto, Mosca, Michels, Durkheim, and Mannheim. Pareto, Mosca, and Michels--the so-called Neo-Machiavellians or Elite-Theorists--sought to repudiate the Marxian legacy; Mannheim actively employed Marxian concepts; and Durkheim developed his own approach as a kind of mediation between Comte and Marx by elaborating the ideas of their common intellectual ancestor, Saint-Simon. As for Max Weber, who must be regarded as the greatest social scientist of the twentieth century, I show that his engagement with Marx, whom he describes as a "great thinker," is more complex than is widely assumed. It is not Marx whom Weber criticizes, but the Marxists after Marx, some of whom fostered a mechanistic and misleading view of Marx's ideas. Indeed, I document the proposition that Weber converges with Marx both substantively and methodologically, and that much of Weber's work may be understood as complementary to Marx's--an exploration of what Marx called the cultural or ideological "superstructure." In eacZeitlin, Irving M. is the author of 'Ideology and the Development of Sociological Theory', published 2000 under ISBN 9780130165565 and ISBN 0130165565.