I Remember the Alamo 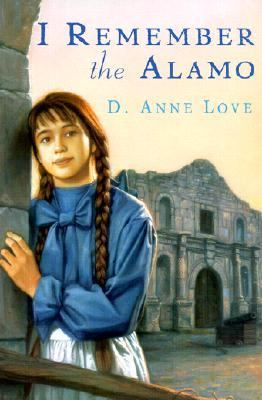 Gone to Texas One afternoon toward the end of October, Jessie McCann looked up from her family's wash to see a horse and rider coming through the trees. She dropped the stick she was using to stir the clothes and raced along the dirt path, bursting into her cabin flushed and breathless. "Mama! Yancy! Pa's coming!" Mama looked up from her spinning wheel. "I don't think so, dear. It's too soon." Yancy came in, his arms loaded with firewood. At fifteen, he was taller than Pa and almost as strong. He grinned at Jessie. "What happened? I heard you yelling clear out to the woodpile." "Pa's coming. I saw him riding up the road." "See who it is, son," Mama said calmly. Yancy looked out. "It is Pa! Come on, Jess!" Pa rode up, his saddlebags bulging. He leapt from the saddle and swept Mama into the air. "Luther!" she cried. "Put me down!" But she was laughing right along with him. "What on earth are you doing back here? I thought you were going to Smathers' Bluff." "Plans changed. Let's go in and I'll tell you about it. Where's Tad?" "Here I am, Pa!" Tad launched himself into Pa's arms. "I thought you weren't coming back till Saturday. What did you bring me? A silver whistle?" "Something better than a whistle," Pa said, setting Tad down. "Is there any coffee, Ruth? I'm plumb wore out." While Mama made coffee, Jessie cooked Pa's eggs just the way he liked them. They all sat at the table while Pa ate. All but two-year-old Callie, who was sound asleep in her crib. When his plate was clean, Pa pushed it away. Mama poured more coffee. Then Pa said, "Guess who I met on the way to Smathers' Bluff?" "Davy Crockett!" Tad said. "No," Pa said, his brown eyes full of laughter. "Guess again." "President Jackson!" Jessie guessed. "Oh, I hope not!" Mama said. "Not with you in those tatty old clothes, Luther." Pa laughed. "Andy Jackson's not much for appearances himself, Ruth. But no, I didn't see Old Hickory." He tipped his chair back. "On the way to Smathers' Bluff, I met two Texians. Finest fellows you'd ever want to meet. They say folks down there are about ready to declare their independence from Mexico. And there's thousands of acres of prime land to be had at bargain prices." Jessie shot Yancy a sideways look. "I know what you're thinking," Pa said. "But these fellows said Texas is chock-full of great rivers and green rolling prairies. Not rocky like Kentucky. Why, that land is so rich a man can practically plow it with his bare hands. Just think, Ruth, what we could do with a farm like that." "But we're settled here now," Mama said. "The children have a school, and you have your shop." "A tinker's shop," Pa scoffed. "You may think it's nothing, but folks depend on you all the same," Mama declared. "Who would fix their tools and clocks, if not for you?" "Well, from now on, they'll be depending on that Hallet fellow from over on Alton's Creek." "What?" "It was getting to me, Ruth. Sitting there every day fiddling with broken-down tools, while the whole big world was rushing by outside. So, after those two Texians rode off, I went and talked to Hallet. You know he's been after me to sell for more'n a year now." "Oh, Pa!" Jessie cried. "You didn't!" "Yes, ma'am, I surely did!" Pa's laughter rumbled like mountain thunder. "Put everything I wanted into my two saddlebags and came straight home. This time next week, we'll be halfway to Texas." "Texas?" Tad jumped up,Love, D. Anne is the author of 'I Remember the Alamo' with ISBN 9780440416975 and ISBN 0440416973.