I, Houdini The Autobiography of a Self-Educated Hamster 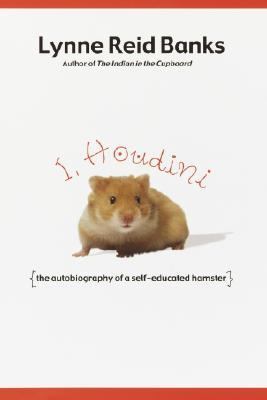 Chapter 1 I am Houdini. No, no, no. Not that oneof course not. He's dead long ago. Besides, he was a human being and I am a hamster. But let me assure you that, as my namesake was no ordinary man, I am no ordinary animal. Well, that much is fairly obvious, isn't it? I mean, what ordinary hamster even knows he's a hamster? What ordinary hamster can think, reason, observein a word, educate himself? Show me the hamster, anywhere, with an intellect, a vocabulary like mine! You can't. Nor can you show me one that can live with humans on a footing of absolute equality because he can understand their language, and because, quite frankly, he has more brains in his head than most of them have. I fear you will think me conceited. I assure you I'm not. It's merely that I have a just and objective appreciation of my own exceptional qualities. It would be as futile to deny that I am exceptional as it would be for an ordinary hamster to boast that he was my equal. Besides, if I were conceited, I would claim to be perfect. I don't. Certainly not! I have my faults and weaknesses, my moments of frailty. I, too, have made mistakes, succumbed to temptations. But I think I may fairly claim to have built up my character, over the months of my long life, until not many fingers could be pointed at me in accusation. Indisputably I conduct myself with more wisdom, ingenuity, and restraint than many of the humans I see about menot that that's saying much. Here, then, is the story of my life so far. From it you may judge if I am not, in truth, as extraordinary in my ways as the Great Houdini was in his. My birth and infancy are almost lost in the mists of memory. I think I may have begun life in a pet shop. It was certainly a large, cold, airy place, exceedingly smelly. Every now and then I catch a whiff that carries me back to those dimly remembered early dayswhen a friend of my family brings a dog to the house, for instance, and once when I met a mouse, which I shall tell about in its turn. At all events it was not a bad place, and I remember I had companions of my own kind there, who gave me warmth by day when we all cuddled up together to sleep. It's strange that, when I think now about living with other hamsters, I shudder with horror at the idea. With one exception I have never seen another hamster since I became mature. And believe me, I never want to. If I ever did see one, I believe I would be overcome with rage, and fly to attack it. Why this should be, I don't know, for I have a very calm temper as a rule, and despise those who lose their self-control (something I see all too often in this house, I regret to say). So, whatever I have to complain of in my life, it is not loneliness. I am never lonely. My worst trial here was imprisonment. I say "was" because luckily it happens less and less now. The Father is my worst enemy in this respect. He has very fixed ideas about "pets" (as I suppose I must laughingly call myself, taking the human point of view). "Pets are all right in their place," he keeps on saying. (He does tend to repeat things, a sign of a small mind.) His notion of my place is, of course, my cage, and wherever and whenever he catches me, he grabs me up and stuffs me back through that dreaded little entrance tunnel and claps in the round stopper. He never seems to believe it when the boys tell him I've even found a way round that. Anyway, it doesn't worry me too much anymore. The Mother, or one of the children, will soon take pity on me if I just go about it the right way, if I can't get out by myself. So I just whip up the tubes into my loft, unearth something tasty from my store, and then curl up and goBanks, Lynne Reid is the author of 'I, Houdini The Autobiography of a Self-Educated Hamster' with ISBN 9780385730754 and ISBN 0385730756.