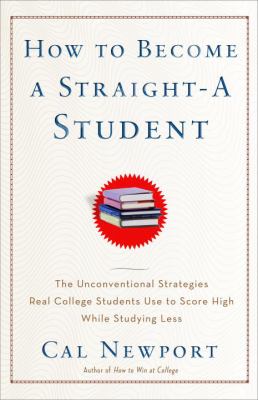 A common complaint I hear from students is that they never seem to have enough time to finish all of their work. They vent about how many hours they spendlate nights reviewing in the library, weekends sacrificed to paper writingbut no matter how hard they try, there always seems to be something else due. As Matthew, a straight-A student from Brown, explains, it's easy for college students to become "stuck in a state of permanent catch-up." Understandably, these students feel like they have reached their academic limit; they believe that unless they forgo sleep or any semblance of a social life, there are simply not enough hours in the day to stay on top of all their schoolwork. Let's start by getting one thing clear: This belief is false. The problem here is not the amount of available hours, but rather how each hour is spent. I know this from firsthand experience. While researching this book, I spent time with some of the country's most accomplished students, and I can assure you that no matter how diligent you think you are, there is a Rhodes scholar out there who fits in three times the amount of work and activities you do and probably still manages to party harder than you would ever dare. I don't mean to imply that everyone should aim to become a drunken Rhodes scholar (though it would certainly be fun to try); rather, my point is that a surprising amount of work, relaxation, and socializing can be extracted from a single twelvehour day. A lack of time, therefore, isn't enough to explain why so many students feel overwhelmed. So what does explain this phenomenon? The answer, as it turns out, has much more to do with how we work than what we're trying to accomplish. As humans, our minds have evolved to prefer short-term tasks such as "run away from that lion" or "eat food." Therefore, when you walk into the library on a Sunday morning with the goal of finishing all of your homework and writing a paper, your brain isn't happy. The idea of spending eight consecutive hours trapped in a study carrel is dispiriting. Plus, it's hard to focus for that long, so pretty soon fatigue will set in, your concentration will wander, and every distraction will suddenly seem impossibly appealing. Before you know it, the day will be over and you'll realize that you haven't accomplished much productive work at all. The next day, new assignments will pile onto those you didn't finish on Sunday, and the tedious process starts all over again. Jason, a straightA student from the University of Pennsylvania, uses the term "pseudoworking" to describe this common approach to studying. The pseudoworker looks and feels like someone who is working hardhe or she spends a long time in the library and is not afraid to push on late into the nightbut, because of a lack of focus and concentration, doesn't actually accomplish much. This bad habit is endemic on most college campuses. For example, at Dartmouth there was a section of the main library that was open twentyfour hours a day, and the students I used to see in there late at night huddled in groups, gulping coffee and griping about their hardships, were definitely pseudoworking. The roommate who flips through her chemistry notes on the couch while watching TV is pseudoworking. The guy who brings three meals, a blanket, and six-pack of Red Bull to the study lounge in preparation for an all-day paperwriting marathon is also pseudoworking. By placing themselves in distracting environments and insisting on working in long tedious stretches, these students are crippling their brain's ability to think clearly and efficiently accomplish the task at hand. The result is fatiNewport, Cal is the author of 'How to Become a Straight-A Student The Unconventional Strategies Real College Students Use to Score High While Studying Less', published 2006 under ISBN 9780767922715 and ISBN 0767922719.