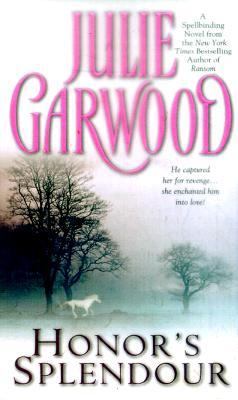 From Chapter Two Dear God, she wasn't going to be left behind.Madelyne took a deep breath, trying to calm herself. She told herself she was just too distraught to think clearly. Of course the baron wasn't going to take her with him. Why, she wasn't significant enough to bother about.She decided she still needed to hear his denial. "You don't think to take me with you, do you?" she blurted out. Her voice sounded strained; she knew she hadn't been able to keep the fear out of her voice.Duncan walked over to Madelyne. He took hold of her satchel and threw it to his squire. She had her answer then. Madelyne stared up at Duncan, watched him swiftly mount, and then extend his hand down to her.Madelyne began to back away. God help her, she was going to defy him. She knew if she tried to climb the distance to the top of his demon horse, she'd disgrace herself by fainting, or worse, screaming. In truth, she believed she preferred death to humiliation.She was more frightened of the stallion than she was of the baron. Madelyne was sadly lacking in her education, and possessed none of the most basic riding skills. Memories of very young days, when Louddon had used those few riding lessons as a tool to inflict submission, still visited her on occasion. As a fully grown woman, she realized her fears were unreasonable, yet the fretful child inside her still rebelled with stubborn, illogical fright.She took another step back. Then she slowly shook her head, denying Duncan's assistance. Her decision was made; she'd force him to kill her if that was his inclination, but she wasn't going to get on the stallion.Without a thought as to where she was going, Madelyne turned and walked away. She was trembling so much, she stumbled several times. Panic was building inside until she was almost blinded by it, yet she kept her gaze directed or the ground and continued on, one determined step at a time.She stopped when she came to the mutilated body of one of Louddon's soldiers. The man's face was horribly disfigured. The sight proved to be Madelyne's breaking point. She stood there, in the center of the carnage, staring at the dead soldier, until she heard a tortured scream echo in the distance. The sound was soul-wrenching. Madelyne put her hands over her ears to try to block out the noise but the action didn't help. The horrible sound went on and on.Duncan spurred his horse forward the moment Madelyne started screaming. He reached her side, leaned down, and effortlessly lifted her up into his arms.She stopped screaming when he touched her. Duncan adjusted his heavy cloak until his captive was completely covered. Her face rested against the steel links of his hauberk, yet he took time and attention to pull some of her own cloak forward so that the side of her cheek was cushioned against the soft sheepskin lining.He didn't question his desire to be gentle with her. The picture flashed before him of Madelyne kneeling in front of him, taking his near-frozen feet under her own gown to give them warmth. It had been an act of kindness, that. He could do no less for her now. After all, he was the one solelyresponsible for causing Madelyne such pain in the first place.Duncan let out a long sigh. It couldn't be undone. Hell, it had started out as such an easy plan too. Leave it to a woman to confuse it.There was much to reevaluate now. Though he knew Madelyne wasn't aware of it, she had certainly complicated the issues. He'd have to sort it all out he told himself. The plan was changed now, whether he liked it or not, for he knew with a certainty that both amazed and infuriated him that he'd never let Madelyne go.Duncan tightened his hold on his captive and finally gave the signal to ride. He remained behind to form the end of the long procession. When the last of his soldiers had cleared the area, and only Gilard and the young squire flanked his side, Duncan took precious minutes to stGarwood, Julie is the author of 'Honor's Splendour' with ISBN 9780671737825 and ISBN 0671737821.