Hitler and the Holocaust 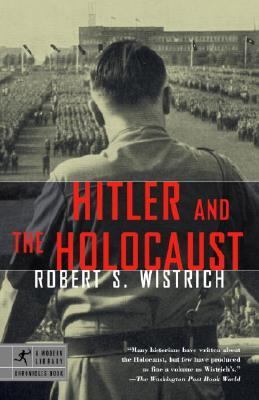 Anti-Semitism and the Jews "After Satan Christians have no greater enemies than the Jews. . . . They pray many times each day that God may destroy us through pestilence, famine and war, aye, that all beings and creatures may rise up with them against the Christians." -Abraham a Sancta Clara Viennese Catholic preacher (1683) "I hold the Jewish race to be the born enemy of pure humanity and everything noble in it. It is certain that it is running us Germans into the ground, and I am perhaps the last German who knows how to hold himself upright in the face of Judaism, which already rules everything." -Richard Wagner (1881) "Jewry is one of the great negative principles of world history and thus can only be understood as a parasite within the opposing positive principle. As little as Judas Iscariot with his thirty silver coins . . . can be understood without the Lord whose community he sneeringly betrayed . . . that night side of history called Jewry cannot be understood without being positioned in the totality of the historical process where God and Satan, Creation and Destruction confront each other in an eternal struggle." -Walter Frank, "German Science in Its Struggle against World Jewry," German radio broadcast, 11 and 13 January 1939 Throughout recorded time, there have been countless massacres, some on religious grounds, others for political or territorial reasons. Native peoples have been exterminated in colonial wars. Millions of Africans were sold into slavery. The colonization of North America, Australia, Africa, and other parts of the globe by expanding Western societies involved constant displacement, despoliation, and sometimes even the genocide of indigenous populations in the name of empire, plunder, and "progress." The Turkish massacre of more than a million Armenians during the First World War marked a new scale of brutality. However, if the number of victims alone were to be our point of departure, then we should look to those unfortunate Soviet citizens who were shot, starved, or worked to death in the gulags of Stalinist Russia as "enemies of the people," in the name of Marxist ideology. The victims of this "autogenocide," which a totalitarian regime inflicted on its own subjects, may have numbered as many as twenty million. (While staggeringly high, this was a much lower percentage of all Soviet citizens than the one third of all Jewish people in the world who were killed by the Nazis.) No less horrifying were the events in Maoist China (the full story has yet to be told) and, on a smaller scale, in Communist Cambodia during the 1970s. The slaughter in Rwanda and "ethnic cleansing" in the former Yugoslavia in the 1990s demonstrate that the genocidal chapter in human history is far from over. Even during the Second World War, several genocides occurred, though of different magnitudes. Approximately three million Polish Gentiles fell victim to the Nazis, as did a similar number of Russian POWs who were starved to death by the Germans. Both groups were used as guinea pigs at Auschwitz-Birkenau before the gassing of Jews began. The German war in the east involved much more than exterminating the Jews: it was initially conceived of as part of a larger design for a radical racial restructuring in which Poles, Russians, and Ukrainians would be expropriated, deported, or killed. Gypsies, too, were earmarked for destruction; between 250,000 and half a million Gypsies were sent to their deaths between 1939 and 1945, coterminous with the Jewish Holocaust. Gypsies (Roma and Sinti) did not, of course, hold the same place either in Christian consciousness or in the Nazi worldview as did Jews or Judaism, but prejudice and hostility toward their nomadic way of life was nonetheless widespread and in some ways comparable to the perception ofWistrich, Robert S. is the author of 'Hitler and the Holocaust', published 2003 under ISBN 9780812968637 and ISBN 0812968638.