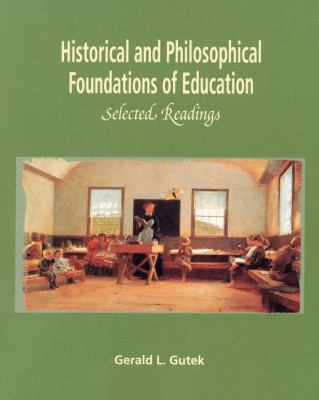 Preface Historical and Philosophical Foundations of Education: Selected Readingsdeveloped from my more than three decades of teaching the history and philosophy of education at Loyola University Chicago and as a visiting professor at Northern Michigan University, the University of Glasgow in Scotland, and Otterbein College. It can be used as a companion volume withHistorical and Philosophical Foundations of Education: A Biographical Introduction,or it can be used as a separate text. The overriding goal in the book is to provide teachers, prospective teachers, and educational administrators and personnel with an understanding of their profession by exploring its historical and philosophical roots through the writings of the world's great educational thinkers. ORGANIZATION AND COVERAGE The book provides primary source readings from the works of the world's leading thinkers on education. It is organized around three broad themes: major educational movements in world history, the biographies of leading educators, and the philosophies and ideologies that emanated from their ideas. The identification of educational thinkers and the selected primary sources in the book reflect the major movements in world history: Plato, Aristotle, and Quintilian represent the Greek and Roman classical period; Thomas Aquinas, the Middle Ages; Erasmus, the Renaissance; John Calvin and Johann Amos Comenius, the Protestant Reformation; Jean-Jacques Rousseau and Johann Heinrich Pestalozzi, the Enlightenment and post-Enlightenment periods; Thomas Jefferson and Mary Wollstonecraft, the age of revolution; Horace Mann, the foundations of the American republic; Robert Owen, John Stuart Mill, and Herbert Spencer, the industrial revolution and the rise of ideologies; Friedrich Froebel and Maria Montessori, the development of new insights on early childhood education; Jane Addams and John Dewey, the progressive movement; Mohandas Gandhi, the end of imperialism in the postcolonial world; Mao Tze-tung, revolutionary Marxism; W E. B. Du Bois, the rise of African American consciousness. Each primary source is preceded by a biographical sketch and discussion of the thinker's principal ideas on education. These brief biographies and discussions are designed to give the great movements of educational history a human face and perspective. The selection is introduced by focusing questions, which guide the student in reading the selection. The reading is followed by suggestions for further reading. The selections, which are situated in their historical contexts, were chosen because of their relevance to philosophical and ideological questions in education. What did the educational thinker have to say about the nature of truth and value, the meaning of education, and the role of schooling? How did the thinker conceive of teaching and learning? For example, an examination of Plato's ideas leads to a consideration of philosophical Idealism; Aristotle's ideas, to Realism; Thomas Aquinas, to Thomism; Erasmus, to Humanism; Comenius, to Pansophism; Rousseau, to Naturalism; and Dewey, to Pragmatism. The choice of selections is also designed to provide students with an understanding of ideology and how it influences educational policy. Here, Robert Owen provides insights into utopianism, Mary Wollstonecraft into feminism, John Stuart Mill into liberalism, Herbert Spencer into social Darwinism, Jane Addams into progressivism, Mao Tze-tung into Marxism, and W E. B. Du Bois into Pan Africanism. FORMAT The book is divided into 22 chapters, each of which examines the life, ideas, and a primary source selection of one of the world's great educational thinkers. It builds, in chronological fashion, from the ancient classical Greek and Roman period to the modern thinkers of the twentieth century. Each chapter is organized into the following sections: ABiographical Sketchexamines the key eveGutek, Gerald L. is the author of 'Historical and Philosophical Foundations of Education Selected Readings', published 2000 under ISBN 9780130122339 and ISBN 0130122335.