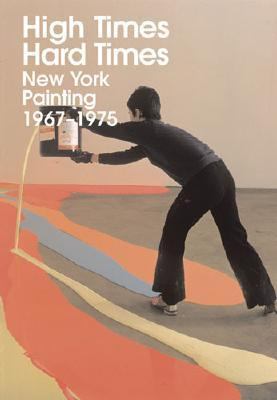 In the late 1960s, the New York art world was, famously, an exhilarating place to be. New forms, including performance and video art, were making their debuts, and sculpture was developing in startling ways. In the midst of it all, experimental abstract painting was pressing art's most iconic medium to its limits and beyond. High Times, Hard Timesfills a gap in coverage of this moment in history, recapturing its liveliness and urgency with more than 42 key pieces by 38 artists who were living and working in New York at the time. Many of those featured artists have contributed personal statements reflecting on the work, its meaning and the social scene that surrounded it, including Lynda Benglis, Mel Bochner, Roy Colmer, Mary Corse, David Diao and Peter Young, Guy Goodwin, Harmony Hammond, Mary Heilmann, Cesar Paternosto, Howardena Pindell, Dorothea Rockburne, Carolee Schneemann, Alan Shields, Joan Snyder, Franz Erhard Walther and Jack Whitten, as well as one curator and one critic, Marcia Tucker and Robert Pincus-Witten. The critic Katy Siegel and the painter David Reed have written essays tha focus, respectively, on the work's explosive artistic and political context, and the experience of being a young painter living in New York during these years. Additional pieces by Dawoud Bey and Anna Chave focus on race and gender in that milieu. Color illustrations of every featured work, along with supplementary historic photographs from the period, ephemera, biographies, a timeline and a bibliography round out a beautiful, much-needed book, a complete reference on a crucial era.Siegel, Katy is the author of 'High Times, Hard Times New York Painting 1967-1975' with ISBN 9781933045399 and ISBN 1933045396.