Hero of Our Time 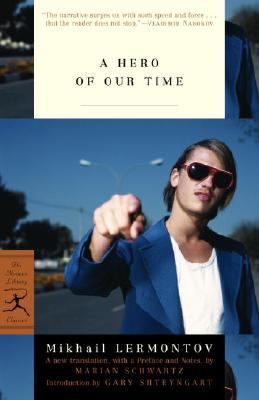 I BELA I was traveling post from Tiflis. My cart's entire load consisted of one small valise, which was half filled with travel notes about Georgia. Of these, the greater part, fortunately for you, have been lost, and the valise containing my remaining possessions, fortunately for me, is intact. The sun was already beginning to drop behind the snowy ridge when I rode into the Koyshaur Valley. The driver, an Ossetian, drove the horses tirelessly in order to make it up Koyshaur Mountain by nightfall, singing songs at the top of his voice. A glorious spot, this valley! On every side of the mountain are impregnable reddish cliffs hung with green ivy and crowned with clusters of plane trees, yellow precipices scoured by running water, and there, high up, a golden fringe of snows, while below, the Aragva, having embraced another nameless stream gushing noisily from a black, mist-filled gorge, has stretched out like a silver thread and shimmers like a snake with scales. When we reached the foot of Koyshaur, we stopped at an inn. Here, crowded noisily around, were a score of Georgians and mountaineers; close by, a caravan of camels had halted for the night. I was obliged to hire oxen to drag my cart up this accursed mountain because it was already autumn and the roads were icy--and this mountain was nearly two versts long. There was nothing to be done for it: I hired six oxen and several Ossetians. One of them hoisted my valise on his shoulders, the others began helping the oxen with their shouts--and nothing more. Behind my cart, a team of four oxen was pulling another with the greatest ease, despite the fact that it was piled high, to the very top. This circumstance amazed me. Walking behind the cart was its owner, who was smoking a small Kabardian pipe set in silver. He was wearing an officer's overcoat without epaulets and a shaggy Circassian hat. He seemed to be about fifty; his swarthy complexion showed that he was long familiar with the Caucasian sun, and his prematurely gray whiskers were not in keeping with his firm step and robust countenance. I walked over to him and bowed in greeting; he returned my bow without speaking and released a huge puff of smoke. "You and I are fellow travelers, it seems." He again bowed, without speaking. "You must be on your way to Stavropol." "Exactly so...with government property." "Tell me, please, why is it that four oxen are pulling your heavy cart easily, while six beasts can scarcely budge my empty one, even with the help of these Ossetians?" He smiled slyly and gave me a significant look. "You doubtless have not been in the Caucasus long." "About a year," I replied. He smiled a second time. "But what is the matter?" "What's the matter! Horrible brutes, these Asiatics! You think they're helping by shouting? The devil only knows what they're shouting! The oxen understand them; you could harness up a score of them and still, if they shouted in their way, the oxen would never budge. Horrible swindlers! But what can you expect from them'... They enjoy fleecing the travelers who pass through. The rogues have been spoiled! You'll see, they're going to get a tip from you as well. Oh, I know them, they can't fool me." "Have you served here long?" "Yes, I served here under Alexei Petrovich," [Ermolov] he replied, assuming a dignified air. "When he arrived at the frontier, I was a second lieutenant," he added, "and under him I received two promotions for actions against the mountaineers." "And now you are...'" "Now I'm counted with the Third Frontier Battalion. And you, may I be so bold as to ask?" I told him. At this the conversation ended, and we continued toLermontov, Mikhail is the author of 'Hero of Our Time', published 2004 under ISBN 9780812970760 and ISBN 0812970764.