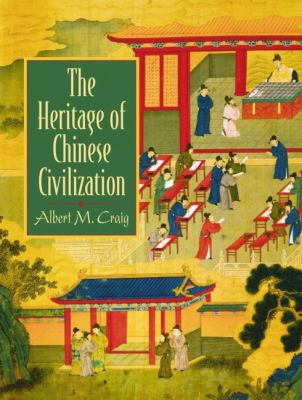 Preface China is one of the birthplaces of civilization. Of the original civilizations, it is the only one which has continued down to the present. The civilizations of ancient Mesopotamia, Egypt, and India were all submerged or supplanted by subsequent waves of very different cultures. Chinese civilization, to be sure, was not static. It continued to evolve, but while it absorbed from outside influences, it was never wholly swamped by them. During the seventh and eighth centuries C.E., China's writing system, philosophies, and technology spread to Japan, Korea, and Vietnam, defining the area known today as East Asia. Its poetry, literature, and arts were no less influential. Today China is a nuclear power with a fifth of the world's population. Its economy is burgeoning. To understand the world today, one must understand China, and to understand China, one must understand its past. This volume consists in the main of the China chapters ofThe Heritage of World Civilisations,though they have been extensively revised. It provides a chronological framework and a short narrative of China's long history. It does not neglect the ruling dynasties, but it also treats social, economic, and cultural developments that cut across dynastic lines. There exist, of course, several excellent thick histories of China. Their only drawback is that length often precludes the assignment of other readings. For the instructor who wishes to approach Chinese history topically or assign monographs, collections of documents, novels, or movies, the brevity of this text may prove an advantage. Since brevity was a goal, the author asserts with seeming confidence many things that may be true only in the balance. Proper qualifications would take up many pages. The author has picked many key historical variables for his reconstruction of the past. In doing so, however, he has inevitably left out other variables that merit attention. Reading assignments in other works, perhaps from the bibliographies given at the end of each chapter, may provide a counterpoint to the account in the text. Written history is an abstraction. In any society, change or stability is a consequence of the feelings and actions of hundreds of thousands or millions of people. Each person lives in a family, has social ties extending to the larger society, works for a living, and is constrained and protected by a structure of rule. The totality of such relationships shapes the actual history of a nation. The historian, at best, grasps bits and pieces of this past. In China, despite the fact that its written record in the premodern ear surpassed that of any other nation, most of the people lived in obscurity and left no traces. Writing its history from surviving sources is like doing a jigsaw puzzle with most of the pieces missing. It is also difficult to see the past in the terms in which it saw itself. Even studying the West--our own civilization--we catch only glimpses of what it meant to be, say, a merchant in medieval Hamburg. What family, society, and the universe looked like to a merchant of Hangchow during the Southern Sung dynasty is even more difficult to ascertain. But some inkling may be gleaned from original sources. To this end, translations of poems, philosophy, essays, scenes from novels, and the like, are included both in the narrative and in the form of boxed quotations. The immediacy of these writings provides windows into the actual thought and feelings of the actors in China's history. They not only illuminate the history, but they remind us that Chinese living a thousand years ago had many of the same hopes, fears, joys, and sorrows that we do today. We recognize these shared feelings despite the powerful shaping of human experience by cultural modalities and social organization. The text contains many maps. Peking in China's north is as different from Canton in the near tropical southeast as is BostoCraig, Albert M. is the author of 'Heritage of Chinese Civilization', published 2000 under ISBN 9780135766200 and ISBN 0135766206.