Helping the Struggling Adolescent A Guide to Thirty-Six Common Problems for Counselors, Pastors, and Youth Workers 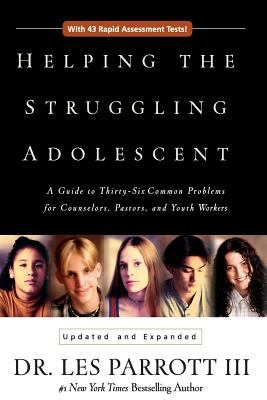 Chapter 1Adolescence: A Struggle for IdentityDuring World War II, Erik H. Erikson coined a phrase that stuck - identity crisis. He used it to describe the disorientation of shell-shocked soldiers who could not remember their names. Through the years, this phrase has become a useful tool to describe the struggle of growing up.Achieving a sense of identity is the major developmental task of teenagers. Like a stunned soldier in a state of confusion, sooner or later, young people are hit with a bomb that is more powerful than dynamite - puberty. Somewhere between childhood and maturity their bodies kick into overdrive and fuel changes at an alarming rate. With this acceleration of physical and emotional growth, they become strangers to themselves. Under attack by an arsenal of fiery hormones, the bewildered young person begins to ask, "Who am I?"While achievement of a meaningful answer to this question is a lifelong pursuit, it is the burning challenge of adolescence. According to Erikson, having an identity - knowing who you are - gives adolescents a sense of control that allows them to navigate through the rest of life.Without identities, awkward adolescents carry a "how''m-I-doing?" attitude that is always focused on their concern about impressions they are making on others. Without self-identities they will be or do whatever they think others want. They will flounder from one way of acting to another, never able to step outside of a preoccupation with their own performance and genuinely ask others, "How are you doing?" Erikson calls this miserable state "identity diffusion."(1)The successful formation of self-identity follows a typical pattern. Teens identify with people they admire. Whether in real life or through magazines and TV, they emulate the characteristics of people they want to be like. By the end of adolescence, if all goes as it should, these identifications merge into a single identity that incorporates and alters previous identifications to make a unique and coherent whole.The quest for identity is scary. Somewhere between twelve and twenty years of age, adolescents are forced to choose once and for all what their identity is to be. It is a formidable task. Uncertain which of their mixed emotions are really their true feelings, they are pushed to make up their minds. Their confusion is complicated further when they begin to guess what others, whose opinions they care about, want them to be.Four Fundamental Views of the Self- The subjective self is the adolescent''s private view of who she sees herself to be. Although this self-view has been heavily influenced by parents and has been hammered out in interactions with peers, it is still her own assessment.- The objective self is what others see when they view the adolescent. It is the person others think the teen is.- The social self is the adolescent''s perception of herself as she thinks others see her. It is what she thinks she looks like to others.- The ideal self is the adolescent''s concept of who she would like to become, her ultimate goal. (2)For adolescents who never achieve an integrated identity, "all the world''s a stage." In their adult years they will play the part of human beings who change roles to please whoever happens to be watching. Their clothes, their language, their thoughts, and their feelings are all a part of the script. Their purpose will be to receive approval from those they hope to impress. Life will become a charade, and players will never enjoy the security of personal identity or experience the strength that comes from a sense of self-worth.How Adolescents Search for IdentityYoung people look for identity in uncounted ways. In this section, seven common paths are examined: family relations, status symbols, "grown-up" behavior, rebellion, others'' opinions, idols, and cliquish exclusion.Through Family RelationsAdolescents'' families have significant impact on identity formation. To assert individuality and move out of childhood, teenagers wParrott, Les, III is the author of 'Helping the Struggling Adolescent A Guide to Thirty-Six Common Problems for Counselors, Pastors, and Youth Workers', published 2000 under ISBN 9780310234074 and ISBN 0310234077.