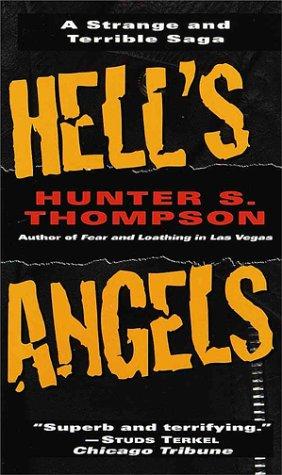 Roll em, boys California, Labor Day weekend . . . early, with ocean fog still in the streets, outlaw motorcyclists wearing chains, shades and greasy Levis roll out from damp garages, all-night diners and cast-off one-night pads in Frisco, Hollywood, Berdoo and East Oakland, heading for the Monterey peninsula, north of Big Sur . . . The Menace is loose again, the Hell's Angels, the hundred-carat headline, running fast and loud on the early morning freeway, low in the saddle, nobody smiles, jamming crazy through traffic and ninety miles an hour down the center stripe, missing by inches . . . like Genghis Khan on an iron horse, a monster steed with a fiery anus, flat out through the eye of a beer can and up your daughter's leg with no quarter asked and none given; show the squares some class, give em a whiff of those kicks they'll never know . . . Ah, these righteous dudes, they love to screw it on . . . Little Jesus, the Gimp, Chocolate George, Buzzard, Zorro, Hambone, Clean Cut, Tiny, Terry the Tramp, Frenchy, Mouldy Marvin, Mother Miles, Dirty Ed, Chuck the Duck, Fat Freddy, Filthy Phil, Charger Charley the Child Molester, Crazy Cross, Puff, Magoo, Animal and at least a hundred more . . . tense for the action, long hair in the wind, beards and bandanas flapping, earrings, armpits, chain whips, swastikas and stripped-down Harleys flashing chrome as traffic on 101 moves over, nervous, to let the formation pass like a burst of dirty thunder . . . They call themselves Hell's Angels. They ride, rape and raid like marauding cavalry--and they boast that no police force can break up their criminal motorcycle fraternity. --True, The Man's Magazine (August 1965) They're not bad guys, individually. I tell you one thing: I'd rather have a bunch of Hell's Angels on my hands than these civil rights demonstrators. When it comes to making trouble for us, the demonstrators are much worse. --Jailer, San Francisco City Prison Some of them are pure animals. They'd be animals in any society. These guys are outlaw types who should have been born a hundred years ago--then they would have been gunfighters. --Birney Jarvis, a charter member of the Hell's Angels who later became a San Francisco Chronicle police reporter We're the one percenters, man--the one percent that don't fit and don't care. So don't talk to me about your doctor bills and your traffic warrants--I mean you get your woman and your bike and your banjo and I mean you're on your way. We've punched our way out of a hundred rumbles, stayed alive with our boots and our fists. We're royalty among motorcycle outlaws, baby. --A Hell's Angel speaking for the permanent record . . . The run was on, "outlaws" from all over the state rolled in packs toward Monterey: north from San Bernardino and Los Angeles on 101; south from Sacramento on 50 . . . south from Oakland, Hayward and Richmond on 17; and from Frisco on the Coast Highway. The hard core, the outlaw elite, were the Hell's Angels . . . wearing the winged death's-head on the back of their sleeveless jackets and packing their "mamas" behind them on big "chopped hogs." They rode with a fine, unwashed arrogance, secure in their reputation as the rottenest motorcycle gang in the whole history of Christendom. From San Francisco in a separate formation came the Gypsy Jokers, three dozen in all, the number-two outlaw club in California, starved for publicity, and with only one chapter, the Jokers could still look down on such as the Presidents, Road Rats, Nightriders and Question Marks, also from the Bay Area, Gomorrah . . . with Sodom five hundred miles to the south in the vast mad bowl of Los Angeles, home turf of the Satan's Slaves, number three in the outlaw hierarchy, custom-bike specialists with a taste for the flesh of young dogs, flashy headbands and tender young blondes with lobotomy eyes; the Slaves were the class of Los Angeles, and thHunter S. Thompson is the author of 'Hell's Angels', published 1985 under ISBN 9780345331489 and ISBN 0345331486.