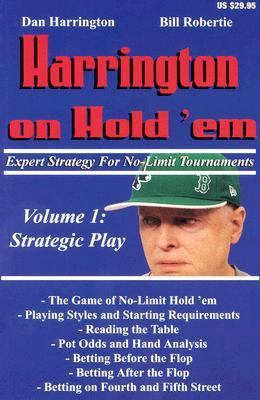 Dan Harrington began playing poker professionally in 1982. On the circuit he is known as "Action Dan," an ironic reference to his solid, but effective style. He has won several major no-limit hold 'em tournaments, including the European Poker Championships (1995), the $2,500 No-Limit Hold'em event at the 1995 World Series of Poker, and the Four Queens No-Limit Hold 'em Championship (1996). Dan began his serious games-playing with chess, where he quickly became a master and one of the strongest players in the New England area. In 1972 he won the Massachusetts Chess Championship, ahead of most of the top players in the area. In 1976 he started playing backgammon, a game which he also quickly mastered. He was soon one of the top money players in the Boston area, and in 1981 he won the World Cup of Backgammon in Washington D.C., ahead of a field that included most of the world's top players. He first played in the $10,000 No-Limit Hold 'em Championship Event of the World Series of Poker in 1987. He has played in the championship a total of thirteen times and reached the final table in four of those tournaments, an amazing record. Besides winning the World Championship in 1995, he finished sixth in 1987, third in 2003, and fourth in 2004. He is widely recognized as one of the greatest and most respected no-limit hold 'em players, as well as a feared opponent in limit hold 'em side games. He lives in Santa Monica where he is a partner in Anchor Loans, a real estate business. Bill Robertie has spent his life playing and writing about chess, backgammon, and now poker. He began playing chess as a boy, inspired by Bobby Fischer's feats on the international chess scene. While attending Harvard as an undergraduate, he became a chess master and helped the Harvard chess team win a number of intercollegiate titles. After graduation he won a number of chess tournaments, including the United States Championship at speed chess in 1970. He also established a reputation at blindfold chess, giving exhibitions on as many as eight boards simultaneously. In 1976 he switched from chess to backgammon, becoming one of the top players in the world. His major titles include the World Championship in Monte Carlo in 1983 and 1987, the Black and White Championship in Boston in 1979, the Las Vegas tournaments in 1980 and 2001, the Bahamas Pro-Am in 1993, and the Istanbul World Open in 1994. He has written several well-regarded backgammon books, the most noted of which are Advanced Backgammon (1991), a two-volume collection of 400 problems, and Modern Backgammon (2002), a new look at the underlying theory of the game. He has also written a set of three books for the beginning player: Backgammon for Winners (1994), Backgammon for Serious Players (1995), and 501 Essential Backgammon Problems (1997). From 1991 to 1998 he edited the magazine Inside Backgammon with Kent Goulding. He owns a publishing company, the Gammon Press (www.thegammonpress.com), and lives in Arlington, Massachusetts with his wife Patrice.Harrington, Daniel is the author of 'Harrington On Hold 'em Expert Strategy For No-Limit Tournaments, Strategic Play', published 2004 under ISBN 9781880685334 and ISBN 1880685337.