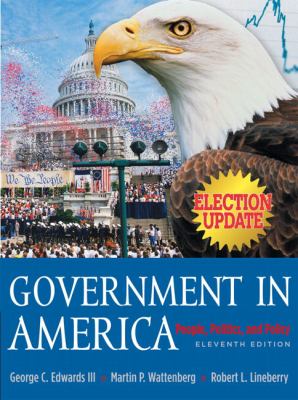 George C. Edwards III is Distinguished Professor of Political Science at Texas A&M University and George and Julia Blucher Jordan Chair in Presidential Studies. He has held visiting appointments at the U.S. Military Academy at West Point, Peking University in Beijing, Hebrew University in Jerusalem, the University of London, and the University of Wisconsin in Madison. When he determined that he was unlikely to become shortstop for the New York Yankees, he turned to political science. Today, he is one of the country¿s leading scholars of the presidency and has authored dozens of articles and written or edited 16 books on American politics and public policy making, including Changing Their Minds? The Failure of the Bully Pulpit; At the Margins: Presidential Leadership of Congress; Presidential Approval; Presidential Leadership; National Security and the U.S. Constitution, and Implementing Public Policy. Professor Edwards has served as president of the Presidency Research Section of the American Political Science Association and is editor of Presidential Studies Quarterly. He has received the Decoration for Distinguished Civilian Service from the U.S. Army and is a member of the Council on Foreign Relations. A frequent speaker at universities around the country, he often lectures abroad as well. Dr. Edwards also applies his scholarship to practical issues of governing, including advising Brazil on its constitution, Russia on building a democratic national party system, and Chinese scholars on democracy, and authoring studies for the 1988 and 2000 U.S. presidential transitions. When not writing, speaking, or advising, he prefers to spend time with his wife, Carmella, sailing, skiing, scuba diving, traveling, or attending art auctions. Martin P. Wattenberg is a professor of Political Science at the University of California, Irvine. His first regular paying job was with the Washington Redskins, from which he moved on to receive a Ph.D. at the University of Michigan. While at Michigan, Professor Wattenberg wrote The Decline of American Political Parties (Harvard University Press), currently in its sixth edition. He is also the author of The Rise of Candidate-Centered Politics. In addition, he has contributed many professional articles to journals such as the American Political Science Review, American Journal of Political Science, American Politics Quarterly, and Public Opinion Quarterly. Professor Wattenberg has lectured about American politics on all of the inhabited continents. His travels have led him to become interested in electoral politics around the world. He recently co-edited two books -- one on party systems in the advanced industrialized world, and the other on the recent trend toward mixed-member electoral systems. Robert L. Lineberry is professor of political science at the University of Houston and has been its senior vice president. He served from 1981 to 1988 as dean of the College of Liberal Arts and Sciences at the University of Kansas in Lawrence. A native of Oklahoma City, he received a B.A. degree from the University of Oklahoma in 1964 and a Ph.D. in political science from the University of North Carolina in 1968. He taught for seven years at Northwestern University. Dr. Lineberry has been president of the Policy Studies Section of the American Political Science Association and is currently the editor of Social Science Quarterly. He is the author or coauthor of numerous books and articles in political science. In addition, for the past 35 years he has taught regularly the introductory course in American government. He has been married to Nita Lineberry for 35 years. They have two children, Nikki, who works in Denver, Colorado, and Keith, who works in Houston, Texas. They have three grandchildren -- Lee, Callie, and Hunter.Wattenberg, Martin P. is the author of 'Government In America People, Politics And Policy', published 0019 under ISBN 9780321276261 and ISBN 0321276264.