Good Hard Kick in the Ass Basic Training for Entrepreneurs 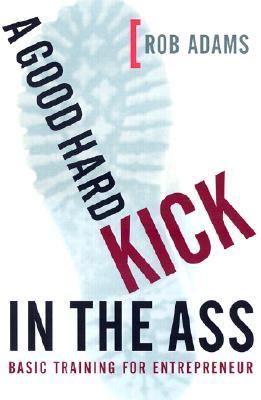 First Kick Good Ideas Are a Dime a Dozen Nothing beats an ice-cold beer on a blazing hot day in Austin, Texas. And nothing leads entrepreneurs down more ratholes than the myth that good ideas are scarce. Both these facts were driven home to me one late summer evening, as I shared a round of draughts with Mike Turner and Mark McClain in the air-conditioned bar of Louie's 106, a local deal-making hot spot around the corner from our offices. This was shortly after AV Labs got underway. Mike and Mark had started with us to pioneer the role of Venture Fellow, a position allowing experienced executives to mentor infant businesses while exploring their own startup ideas. Both ex-VPs at Tivoli Systems, they'd been hard at work trying to pinpoint an idea they could make fly in the marketplace. Together with Kevin Cunningham and Bill Kennedy, ex-Tivoli directors who'd agreed to be part of a new company, they'd been talking to people, researching the Internet, and reviewing industry analyst reports. So far, they hadn't found the right concept--but judging from the positive attitudes that flowed along with the cold beer that afternoon in Louie's, they were having a great time. "We've coined a new term, Rob," said Mark, his gray eyes thoughtful behind wire-rimmed glasses. "Web-roaching." "What's that?" I asked. "We've been using the Internet to research different concepts. We've found out that the minute you hit on an idea you think is unique, four or five roaches scurry out from underneath a rock." At that point Mike jumped in. "We thought we were really out there when we hit upon application firewalls. We figured, hey, what if you could fire up a Web-based application and partition it, then let different outsiders access only certain parts? We thought this was a really unique notion--until Kevin and I found five companies that were already doing it." Now pretty fired up themselves, they told me they'd decided to pursue their one and only idea that seemed to be one-of-a-kind: the next great sensory input to the Internet. I must have looked confused (perhaps because I was). "Smell, Rob, smell," Mark explained. "Face it--we have sight, and we have sound. Now, the Internet needs smell. Our company will make it possible to point to something on the Internet and get an odor." "Cool, huh?" said Mike, grinning as he watched the reaction on my face. Then they both started laughing. I was relieved to know these guys weren't serious about pursuing such an outlandish idea. Unique, undoubtedly, but totally off-the-wall. Of course nobody was doing this--and no wonder! I knew Mike and Mark would soon find a way to put their talents to the entrepreneurial test. In the meantime, as we finished our beers, I promised to pass on any ideas that crossed my mind, and to watch for any interesting trends suggested by the press or analysts. You can imagine how we all laughed when, not long after, I plopped a Money magazine on the conference table at a meeting. In that issue, Money ran a story about a startup on the West Coast. That company's mission--you guessed it--was to provide olfactory input and output over the Internet. Think your idea has to be unique? You're deluded. If Mike and Mark's experience tells you anything, it should tell you this: There really is nothing new under the sun. You wouldn't believe how many would-be entrepreneurs believe otherwise. They come into our office and swear they've got some new, radically cool, killer idea. They expect us to be impressed. They're surprised, even offended, when we're not. Even intelligent, aware, knowledgeable people--people like Mark and Mike--believe a good idea is like the Hope Diamond. A good idea, they think, is rare in its brilliance and perfection. It is utterly unique in the universe. To be successful, entreprenAdams, Rob is the author of 'Good Hard Kick in the Ass Basic Training for Entrepreneurs', published 2002 under ISBN 9780609609507 and ISBN 0609609505.