Good Dog The Story of Orson, Who Changed My Life 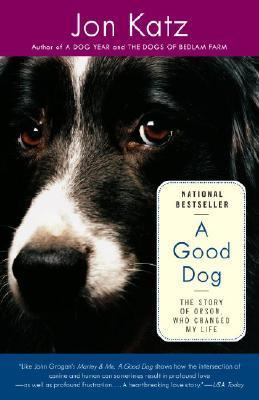 Carolyn Wilki told the five of us to spread out into a circle in her pasture, with our dogs. We were an odd group, a motley mix of dog lovers and our anxious border collies and shepherds arrayed near an aging stone farmhouse in eastern Pennsylvania in the blazing summer sun. The other four people did as instructed, along with their dogs. I didn't. Devon and I were in our third month of working with Carolyn, a respected and fiercely opinionated sheepherder and dog behaviorist. She'd suggested that we join this herding class in addition to our weekly lessons. So we had, with trepidation. I'm not generally a joiner; I don't have a good history with groups. And Devon was not a dog who played well with others, either. Once we were mostly in formation, Carolyn brought out her antique metal box filled with small figures of dogs, sheep, and fences. I groaned. Carolyn was fond of her toy farm creatures, which she'd shown me on our first visit, and loved to demonstrate the ballet that constituted sheepherdinghuman, dog, and sheep all moving in relation to one another. She would haul her box out and carefully place the components in their appropriate positions on a picnic table or on the grass. Then she'd sketch out herding and training moves like an NFL coach diagramming complex patterns for offense. The papers she handed her students when class ended were filled with X's and O's, squibbles and arrows. The X's were dogs, the O's were people. If the X's went here, she'd explain, then the O's would go there. The sheep were usually the squibbles. Devon and I were rarely where we were supposed to be. He herded sheep the way he herded school busesforcefully, impulsively, explosively. At least the sheep could run. This role-playing was not the sort of thing either of us was especially good at. I was allergic to being lectured to, had hated just about every class and teacher I'd ever had, and the favor had been returned. Poor Mr. Hauser actually wept in front of my mother when I had to take his math class for the third time. Neither of us could bear the idea of going another round. Authority issues continued to plague me through my adult life. One reason that being a writer suited me was that most of the time the only jerk I had to put up with was me. Devon had similar issues with commands and obedience. Training seemed to either upset or excite him, and learning to herd sheep seemed unlikely to be an exception. You are a ewe,Carolyn told me, pointing to an O on her diagram, and placing one of her tiny white plastic sheep along a toy fence. You will stand over here and wait to be approached by a dog, she said, gesturing to an eighty-year-old woman in a sun hat holding a terrified sheltie on a leash. Everybody else seemed willing, even enthusiastic, about acting out these herding moves. But I didn't want to be a ewe. Devon looked up at me curiously; I knew there was no way he was going to do this, either. In fact, he suddenly charged after the sheltie, chasing him under Carolyn's truck. I pulled him back, made him lie down, and he settled to watch the proceedings. As Carolyn passed by, dispensing instructions, I whis-peredhoping to avoid a scenethat I didn't want to be a ewe, or to play this game. Carolyn did not suffer fools or rebels gladly. I don't care what you want,she muttered.Do it. It will be good for you. I couldn't. No better at being submissive than this strange dog I now owned, I told Carolyn this wasn't the right class for me. Devon and I retreated to our room (Carolyn's Raspberry Ridge Farm is a bed-and-breakfast as well as a training center) to brood. I put Devon in his crate and lay doKatz, Jon is the author of 'Good Dog The Story of Orson, Who Changed My Life', published 2007 under ISBN 9780812971491 and ISBN 0812971493.