Going Up the River Travels in a Prison Nation 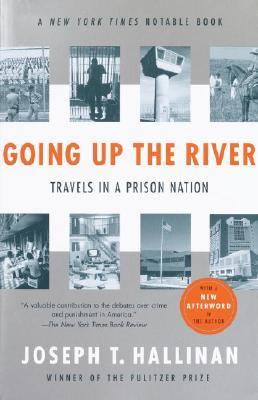 CHAPTER 1 There are two prisons in Beeville, Texas. One sits on the site of a recently closed naval air base and is known as the Garza Unit. The other is known as the McConnell Unit. Beeville, like many prison towns, is a remote place. It lies on the brushy plains of South Texas between San Antonio and Corpus Christi, but it is no closer than an hour's drive to either of them. I had come here for many reasons, but chiefly because I thought I could see in Beeville both the old prison world and the new. In Texas prisons they still do things much as they have for a hundred years. Many of the "units,"as the prisons here are known, are run as large penal farms ? plantations essentially, some spanning more than ten thousand acres ? and the farms grow or raise most everything, from hogs to jalapenos. The crops are tended by inmates, who work the fields under armed guards on horseback, trailed by a pack of hounds (in case a convict tries to escape). Almost no place in America still treats inmates like this, and I had wanted to see this piece of living history before it died. I also wanted to see the modern prison town, and few places seemed to fit the bill better than Beeville. Here was a town of 13,000 people and 7,200 inmates, a ratio unsurpassed almost anywhere in the United States. And yet, some of the town's boosters told me over the phone, they were eager for still more inmates. They were trying, as I knew other American towns were, to turn their community into a prison hub, becoming roughly what Pittsburgh is to steel or Detroit is to cars. But so far they had only the two prisons, the Garza and McConnell units. The McConnell Unit is run by Warden L. W. Woods. The L stands for Leslie, but no one calls the warden Leslie. He is tall, well over six feet, although it is hard to tell how much is hat and boot. He has pale blue eyes and smooth, hairless cheeks. When the warden speaks, which is no more than necessary, he does so from the side of his mouth, and his lips, I notice, barely move. Woods is what is known in the business as a custody warden: he believes in locking people up and keeping them locked up. In Texas, this is something of a religion. Texas incarcerates more people, per capita, than almost any state in the country. Its prison system is so big that one of every nine inmates in the United States is incarcerated here. And each year the number grows. To accommodate this growth the state has built more than one hundred prisons since 1980. The state predicts it will soon have 155,000 inmates, making it the largest prison system in the United States. When I ask Woods if this bothers him, he snorts. "In my opinion, there's a lot more that need it." In 1996, Americans spent $24.5 billion on prisons ? an average of $55 per inmate per day. But, for a variety of reasons, prisons are cheaper in Texas. At the McConnell Unit, it costs just $43 a day to keep a convict ? a figure that makes the warden proud. "We've tried to run it as a business," he says ? a line I hear often from wardens. The McConnell Unit is named after the late chief of police of Beeville, Bill McConnell, who died in 1987. Until recently, the Texas Department of Criminal Justice named its prisons only after governors or distinguished members of the department and then only after their death. But in recent years the department has had so many prisons to name that it has departed from this custom. Now it names its prisons after mayors, state representatives, judges, and policemen, some still living, and some, like Chief McConnell, long dead. There are 2,806 inmates at the McConnell Unit, 504 of whom are currently isolated in an area known as administrative segregation, or ad seg. "Ad seg" is a modern term for an ancient practice. Since at least the Roman Empire, prisons have come with separate cells intended to segregate difficult inmates from the general population. But in theHallinan, Joseph T. is the author of 'Going Up the River Travels in a Prison Nation', published 2003 under ISBN 9780812968446 and ISBN 0812968441.