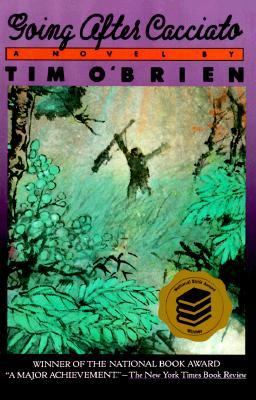 It was a bad time. Billy Boy Watkins was dead, and so was Frenchie Tucker. Billy Boy had died of fright, scared to death on the field of battle, and Frenchie Tucker had been shot through the nose. Bernie Lynn and Lieutenant Sidney Martin had died in tunnels. Pederson was dead and Rudy Chassler was dead. Buff was dead. Ready Mix was dead. They were all among the dead. The rain fed fungus that grew in the men's boots and socks, and their socks rotted, and their feet turned white and soft so that the skin could be scraped off with a fingernail, and Stink Harris woke up screaming one night with a leech on his tongue. When it was not raining, a low mist moved across the paddies, blending the elements into a single gray element, and the war was cold and pasty and rotten. Lieutenant Corson, who came to replace Lieutenant Sidney Martin, contracted the dysentery. The tripflares were useless. The ammunition corroded and the foxholes filled with mud and water during the nights, and in the mornings there was always the next village, and the war was always the same. The monsoons were part of the war. In early September Vaught caught an infection. He'd been showing Oscar Johnson the sharp edge on his bayonet, drawing it swiftly along his forearm to peel off a layer of mushy skin. "Like a Gillette Blue Blade," Vaught had said proudly. There was no blood, but in two days the bacteria soaked in and the arm turned yellow, so they bundled him up and called in a dustoff, and Vaught left the war. He never came back. Later they had a letter from him that described Japan as smoky and full of slopes, but in the enclosed snapshot Vaught looked happy enough, posing with two sightly nurses, a wine bottle rising from between his thighs. It was a shock to learn he'd lost the arm. Soon afterward Ben Nystrom shot himself through the foot, but he did not die, and he wrote no letters. These were all things to joke about. The rain, too. And the cold. Oscar Johnson said it made him think of Detroit in the month of May. "Lootin' weather," he liked to say. "The dark an' gloom, just right for rape an' lootin'." Then someone would say that Oscar had a swell imagination for a darkie. That was one of the jokes. There was a joke about Oscar. There were many jokes about Billy Boy Watkins, the way he'd collapsed of fright on the field of battle. Another joke was about the lieutenant's dysentery, and another was about Paul Berlin's purple biles. There were jokes about the postcard pictures of Christ that Jim Pederson used to carry, and Stink's ringworm, and the way Buff's helmet filled with life after death. Some of the jokes were about Cacciato. Dumb as a bullet, Stink said. Dumb as a month-old oyster fart, said Harold Murphy. In October, near the end of the month, Cacciato left the war. "He's gone away," said Doc Peret. "Split, departed." Lieutenant Corson did not seem to hear. He was too old to be a lieutenant. The veins in his nose and cheeks were broken. His back was weak. Once he had been a captain on the way to becoming a major, but whiskey and the fourteen dull years between Korea and Vietnam had ended all that, and now he was just an old lieutenant with the dysentery. He lay on his back in the pagoda, naked except for green socks and green undershorts. "Cacciato," Doc repeated. "The kid's left us. Split for parts unknown." The lieutenant did not sit up. With one hand he cupped his belly, with the other he guarded a red glow. The surfaces of his eyes were moist. "Gone to Paris," Doc said. The lieutenant put the glow to his lips. Inhaling, his chest did not move. There were no vital signs in the wrists or thick stomach. "Paris," Doc Peret repeated. "That's what he tells Paul Berlin, and that's what Berlin tells me, and that's what I'm telling you. The chain of command, a truly splendid instrument. AnyhO'Brien, Tim is the author of 'Going After Cacciato' with ISBN 9780385283496 and ISBN 0385283490.