God in the Wilderness Rediscovering Spirituality With the Adventure Rabbi 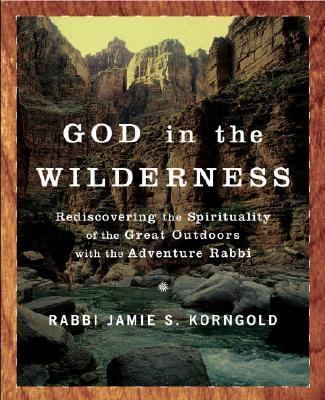 CHAPTER 1 Cultivate the Patience to See Burning Bushes Moses said, "I must turn aside to look at this marvelous sight; why doesn't the bush burn up?" When the Lord saw that he had turned aside to look, God called to him out of the bush: "Moses! Moses!" Exodus 3:3-4 Almost all of us know the story of the burning bush. Moses is out tending his father-in-law's flock when he notices an amazing sight--a bush that burns but is not consumed. He stops to look at it, and God appears to him from the flame. This is the first time that Moses meets God "face-to-face." God taps Moses as the man to free the Israelites and receive the Ten Commandments, and from there on, it's all history. But what if the story had gone differently? What if it went something a little bit more like this: Moses is tending the flock of his father-in-law, Jethro, the priest of Midian. He drives the flock into the wilderness and comes to Horeb, the mountain of God. He had always found that place relaxing, although he never thought much about why, and since Moses has a lot on his mind this particular morning, he decides Horeb is, as always, a good place to sort through his thoughts. Moses thinks through the day ahead. As soon as he has tended to the flock, he needs to rush back to the tent, change into his dress robes, and catch a caravan into the city, because he has a packed day of meetings ahead of him. He is trying to figure out how he can get all his work done in time to get to the gym that night, and still get home before his son Gershom goes to sleep, when his eye catches a marvelous sight! There is a bush all aflame, yet the bush is not being consumed by the fire. Moses says, "I must turn aside to look at this marvelous sight; why doesn't the bush burn up?" Just then his cell phone vibrates. He grabs the phone out of his robe pocket. It is a text message from his friend Nathan, who always seems to know what is going on a few days before anyone else. Moses reads, "Wool futures 2 go up. Don't sell 2day. Call L8r. N8." By the time Moses has read the message, he is well past the bush and has already forgotten about the odd flames. With the phone still in hand, he calls his wife, Zipporah, just to check in. Five minutes later, when he gets off the phone, he remembers the miraculous burning bush, but it is already well behind him. He thinks of going back but realizes that then he won't have time to stop for a cup of coffee, so he calls the fire department, which sends a crew to put out the fire. Thus for a short time Moses became a local hero for saving the wilderness from burning down. Meanwhile, God tried the burning bush routine a few more times, but eventually God realized that no one had time to notice the subtle miracle and scribbled a quick note: "Note to Self: Command these people to take a day off every week so they have time to notice my miracles!" Then God switched to e-mail. But unfortunately, everyone thought God's messages were spam, and deleted them. So ends the story of the Israelites. The Bible never progresses past the burning bush scene of Exodus 3:3, well before the freeing of the Israelites from slavery, the parting of the Red Sea, and the awe-inspiring moment on Sinai, culminating with the giving of the Ten Commandments. The rabbis teach us that the striking part of Moses' behavior in the burning bush story, in its original form, is that he takes the time to notice that the bush is burning but not being consumed. It takes patience to notice that something is on fire but not burning up, because you have to actually sit with it for a while to observe the changes, or lack thereof. The Bible says, "When the Lord saw that he had turned aside to look, God called to him out of the bush" (Exodus 3:4), stressing that it is not until God sees that Moses turns aside that God actuaKorngold, Jamie S. is the author of 'God in the Wilderness Rediscovering Spirituality With the Adventure Rabbi', published 2008 under ISBN 9780385520492 and ISBN 0385520492.