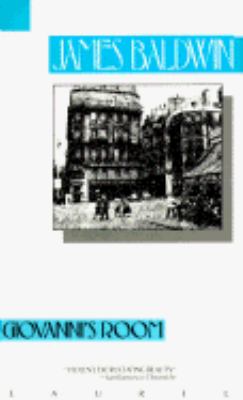 I stand at the window of this great house in the south of France as night falls, the night which is leading me to the most terrible morning of my life. I have a drink in my hand, there is a bottle at my elbow. I watch my reflection in the darkening gleam of the window pane. My reflection is tall, perhaps rather like an arrow, my blond hair gleams. My face is like a face you have seen many times. My ancestors conquered a continent, pushing across death-laden plains, until they came to an ocean which faced away from Europe into a darker past. I may be drunk by morning but that will not do any good. I shall take the train to Paris anyway. The train will be the same, the people, struggling for comfort and, even, dignity on the straight-backed, wooden, third-class seats will be the same, and I will be the same. We will ride through the same changing countryside northward, leaving behind the olive trees and the sea and all of the glory of the stormy southern sky, into the mist and rain of Paris. Someone will offer to share a sandwich with me, someone will offer me a sip of wine, someone will ask me for a match. People will be roaming the corridors outside, looking out of windows, looking in at us. At each stop, recruits in their baggy brown uniforms and colored hats will open the compartment door to ask Complet? We will all nod Yes, like conspirators, smiling faintly at each other as they continue through the train. Two or three of them will end up before our compartment door, shouting at each other in their heavy, ribald voices, smoking their dreadful army cigarettes. There will be a girl sitting opposite me who will wonder why I have not been flirting with her, who will be set on edge by the presence of the recruits. It will all be the same, only I will be stiller. And the countryside is still tonight, this countryside reflected through my image in the pane. This house is just outside a small summer resort which is still empty, the season has not yet begun. It is on a small hill, one can look down on the lights of the town and hear the thud of the sea. My girl, Hella, and I rented it in Paris, from photographs, some months ago. Now she has been gone a week. She is on the high seas now, on her way back to America. I can see her, very elegant, tense, and glittering, surrounded by the light which fills the salon of the ocean liner, drinking rather too fast, and laughing, and watch- ing the men. That was how I met her, in a bar in Saint- Germain-des-Pres, she was drinking and watching, and that was why I liked her, I thought she would be fun to have fun with. That was how it began, that was all it meant to me; I am not sure now, in spite of everything, that it ever really meant more than that to me. And I don't think it ever really meant more than that to her at least not until she made that trip to Spain and, finding herself there, alone, began to wonder, perhaps, if a lifetime of drinking and watching the men was exactly what she wanted. But it was too late by that time. I was already with Giovanni. I had asked her to marry me before she went away to Spain; and she laughed and I laughed but that, somehow, all the same, made it more serious for me, and I persisted; and then she said she would have to go away and think about it. And the very last night she was here, the very last time I saw her, as she was packing her bag, I told her that I had loved her once and I made myself believe it. But I wonder if I had. I was thinking, no doubt, of our nights in bed, of the peculiar innocence and confidence, which will never come again, which had made those nights so delightful, so unrelated to past, present, or anything to come, so unrelated, finally, to my life since it was not necessary for me to take any but the most mechanical responsibility for them. And these nights were being acted out under a foreign sky, with no one to watch, no penalties attached it was this last facBaldwin, James is the author of 'Giovanni's Room', published 1988 under ISBN 9780440328810 and ISBN 0440328810.