Gilded Age A History in Documents 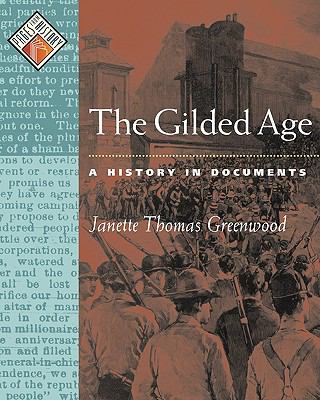 When many Americans think of the Gilded Age, they picture the mansions at Newport, Rhode Island, or the tenements of New York City. Indeed, the late 19th century was a period of extreme poverty thinly veiled by fabulous wealth. However, we should not remember the era only for the strides madeby steel magnate Andrew Carnegie or social reformer Jane Addams. All Americans had to adjust to the dynamic social and economic changes of the Gilded Age--the booming industries, growing cities, increased ethnic and cultural diversity. African American W. E. B. Du Bois, Native American Sitting Bull,and Chinese American Saum Song Bo spoke out against racial injustice. European immigrants Mary Antin and Robert Ferrari suffered the pitfalls and praised the opportunities found in their new country. Pioneer Phoebe Judson lamented the loneliness of making a life out West. And workers at HomesteadSteel lost their lives in an attempt to improve labor conditions. Drawing from the letters, memoirs, newspaper articles, journals, and speeches of Gilded Age Americans, author Janette Greenwood arranges all of these voices to tell a story more vibrant and textured than the simple tale of robberbaron versus starving poor. In addition to these voices, visuals--such as advertisements, maps, political cartoons, and a picture essay on Jacob Riiss urban photographs--create a kaleidoscopic view of the quarter century when diverse Americans struggled for the same goal: a better way of life, withmore justice and democracy for each and all. PAGES FROM HISTORY General Editors: Sarah Deutsch, University of Arizona, Carol Karlsen, University of Michigan, Robert G. Moeller, University of California, Irvine, and Jeffrey N. Wasserstrom, Indiana University, Bloomington Textbooks may interpret history, but the books in the Pages from History series are history. Each title, compiled and edited by a prominent historian, is a collection of primary sources relating to a particular topic of historical significance. Documentary evidence including news articles,government documents, memoirs, letters, diaries, fiction, photographs, and facsimiles allows history to speak for itself and turns every reader into a historian. Headnotes, extended captions, sidebars, and introductory essays provide the essential context that frames the documents. All the books areamply illustrated and each includes a documentary picture essay, chronology, further reading, source notes, and index.Greenwood, Janette Thomas is the author of 'Gilded Age A History in Documents', published 2003 under ISBN 9780195166385 and ISBN 0195166388.