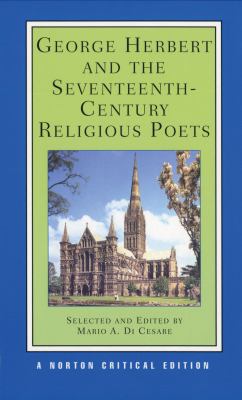 While most of the selections fall under the heading of religiouspoetry, the important secular verse of Marvell and Crashaw is included. Eighty poems by Herbert have been selected from The Temple , and twoearly poems from Isaak Walton's Lives are also included. Crashaw isrepresented by sixteen poems from Steps to the Temple, Delights of theMuses , and Carmen Deo Nostro ; Marvell, by eighteen selections from Miscellaneous Poems ; Vaughan, by forty-five poems from SilexScintillans, Parts I and II ; and Traherne, by twelve poems from the Dobell Folio, The Third Century , and the Burney Manuscript . All of the texts have been freshly edited, and spelling has beenmodernized. Textual Notes specify the procedures followed and givereasons for certain new readings. The poems are fully annotated inorder to clarify unfamiliar allusions and images. A broad range of critical viewpoints is represented in essays by SamuelTaylor Coleridge, Aldous Huxley, W. H. Auden, T. S. Eliot, Anthony Low,L. C. Knights, E. B. Greenwood, Joseph H. Summers, Douglas Bush, HelenC. White, Austin Warren, Richard Strier, Frank Kermode, William Empson,M. C. Bradbrook, M. G. Lloyd Thomas, Edward S. Le Comte, KarinaWilliamson, Dennis Davidson, Robert Ellrodt, E. C. Pettet, S. Sandbank,Arthur Clements, H. M. Margoliouth, and Stanley Stewart. An Annotated Bibliography covers historical and cultural background,the lives and works of the individual poets, and several importantaspects of religious belief especially relevant to the poems.DiCesare, Mario is the author of 'George Herbert and the Seventeenth-Century Religious Poets Authoritative Texts Criticism', published 1978 under ISBN 9780393092547 and ISBN 0393092542.