General in His Labyrinth 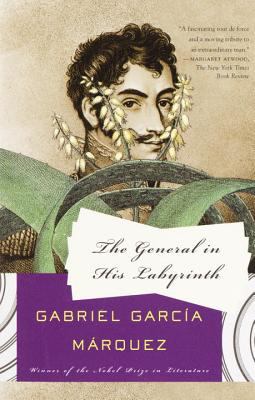 Jose Palacios, his oldest servant, found him floating naked with his eyes open in the purifying waters of his bath and thought he had drowned. He knew this was one of the many ways the General meditated, but the ecstasy in which he lay drifting seemed that of a man no longer of this world. He did not dare come closer but called to him in a hushed voice, complying with the order to awaken him before five so they could leave at dawn. The General came out of his trance and saw in the half-light the clear blue eyes, the curly squirrel-colored hair, the impassive dignity of the steward who attended him every day and who held in his hand a cup of the curative infusion of poppies and gum arabic. The General's hands lacked strength when he grasped the handles of the tub, but he rose up from the medicinal waters in a dolphinlike rush that was surprising in so wasted a body. "Let's go," he said, "as fast as we can. No one loves us here." Jose Palacios had heard him say this so many times and on so many different occasions that he still did not believe it was true, even though the pack animals were ready in the stables and the members of the official delegation were beginning to assemble. In any event, he helped him to dry and draped the square poncho from the uplands over his naked body because the trembling of his hands made the cup rattle. Months before, while putting on a pair of chamois trousers he had not worn since his Babylonian nights in Lima, the General discovered he was losing height as well as weight. Even his nakedness was distinctive, for his body was pale and his face and hands seemed scorched by exposure to the weather. He had turned forty-six this past July, but his rough Caribbean curls were already ashen, his bones were twisted by premature old age, and he had deteriorated so much he did not seem capable of lasting until the following July. Yet his resolute gestures appeared to be those of a man less damaged by life, and he strode without stopping in a circle around nothing. He drank the tea in five scorching swallows that almost blistered his tongue, avoiding his own watery trail along the frayed rush mats on the floor, and it was as if he had drunk the magic potion of resurrection. But he did not say a word until five o'clock had sounded in the bell tower of the nearby cathedral. "Saturday, May 8, 1830, the Day of the Blessed Virgin, Mediatrix of all Grace," announced the steward. "It has been raining since three o'clock in the morning." "Since three o'clock in the morning of the seventeenth century," said the General, his voice still shaken by the bitter breath of insomnia. And he added, in all seriousness: "I didn't hear the roosters." "There are no roosters here," said Jose Palacios. "There's nothing here," said the General. "It's the land of the infidel." For they were in Santa Fe de Bogota, city of the Holy Faith, two thousand six hundred meters above the level of the distant sea, and the cavernous bedroom with its bare walls, exposed to the icy winds that filtered through ill-fitting windows, was not the most favorable for anyone's health. Jose Palacios placed the basin of lather on the marble top of the dressing table, along with the red velvet case that held the shaving implements, all of golden metal. He put the small candleholder with its candle on a ledge near the mirror so the General would have enough light, and he brought the brazier to warm his feet. Then he handed him the spectacles with squared lenses and thin silver frames that he always carried for him in his jacket pocket. The General put them on and began to shave, guiding the razor with as much skill in his left hand as in his right, for his ambidexterity was natural to him, and he showed astonishing control of the same wrist that minutes before could not hold a cGarcía Márquez, Gabriel is the author of 'General in His Labyrinth', published 2003 under ISBN 9781400034703 and ISBN 1400034701.