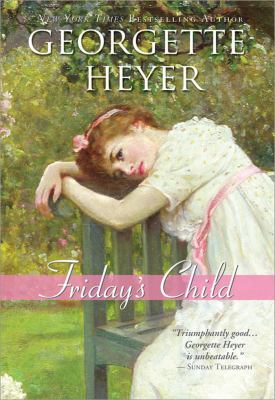 Excerpt from Chapter 1 Do not, I beg of you, my lord, say more!' uttered Miss Milborne, in imploring accents, slightly averting her lovely countenance, and clasping both hands at her bosom. Her companion, a tall young gentleman who had gone romantically down upon one knee before her chair, appeared put out by this faltered request. 'Damn it – I mean, dash it, Isabella!' he expostulated, correcting himself somewhat impa¬tiently as the lady turned reproachful brown eyes upon him, 'I haven't started!' 'Do not!' 'But I'm about to offer for you!' said the Viscount, with more than a touch of asperity. 'I know,' replied the lady.'It is useless! Say no more, my lord!' The Viscount arose from his knee, much chagrined. 'I must say, Isabella, I think you might let a fellow speak!' he said crossly. 'I would spare you pain, my lord.' 'I wish you will stop talking in that damned theatrical way!' said the Viscount. 'And don't keep on calling me "my lord", as though you hadn't known me all your life!' Miss Milborne flushed, and stiffened a little. It was perfectly true, since their estates marched together, that she had known the Viscount all her life, but a dazzling career as an acknowl¬edged Beauty, with half the eligible young gentlemen in town at her feet, had accustomed her to a far more reverential mode of address than that favoured by her childhood's playmate. In some dudgeon, she gazed coldly out of the window, while her suitor took a few hasty turns about the room. The prospect, which was of neat lawns, well-stocked flower-beds, and trim hedges, was a pleasing one, but it was not from any love of sylvan settings that Miss Milborne was at present sojourning in the country. Her withdrawal from the Metropolis some weeks previously had been in consequence of her having contracted an odiously childish complaint which had made it necessary for her to disappear from the Polite World at a moment when she might have been pardoned for considering herself, if not its hub, at least its cynosure. Her Mama, quite as sensible as herself of the ridiculous nature of her indisposition, had announced her to be quite worn-down by the exigencies of fashionable life, and had whisked her off to Kent in a post-chaise-and-four, where, in a comfortable mansion suitably retired from the haunts of men, she was able not only to recover her health and looks in seclusion, but also to communicate her complaint to two abigails, and a youthful page-boy. She had emerged from her sick room some weeks earlier, but since she was still a trifle pale and out of looks, Mrs Milborne, a lady distinguished by her admirable sense, had decided to keep her in the country until (she said) the roses should again bloom in her cheeks. Quite a number of ardent gentlemen had presented themselves at Milborne House, having driven all the way from London in the hopes of being permitted a glimpse of the Incomparable, but the door remained shut against them, and they were obliged to relinquish their nosegays and passionate billets into the hands of an unresponsive butler, and to tool their various chariots back to town without having had even the refreshment of being allowed to press their lips to the fair hand of the Beauty. Lord Sheringham would undoubtedly have met with the same reception had he not presumed in a very unhandsome way upon his long acquaintance with the family, by riding over from Sheringham Place, where he had been spending the night, leaving his horse at the stables, and walking up through the gardens to enter the house through one of the long windows that opened on to the lawn. Encountering an astonished footman, his lordship, very much at home, had tossed his whip and his gloves on to a table, laid his curly-brimmed beaver beside them, and demanded the master of the house. Mr. Milborne, being quite unblessed by the worldly wisdom which characterised his spouse, had no sooner grasped the puHeyer, Georgette is the author of 'Friday's Child', published 2008 under ISBN 9781402210792 and ISBN 1402210795.

5 from $8.49
Loading marketplace prices 5 copies from $8.49 How does the rental process work?
View more