For Her Own Good Two Centuries of Experts' Advice to Women 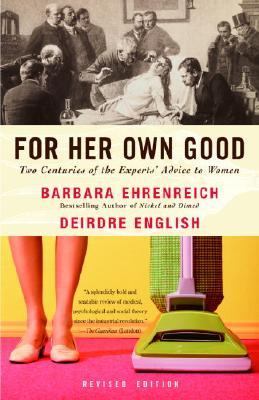 One In the Ruins of Patriarchy "If you would get up and do something you would feel better," said my mother. I rose drearily, and essayed to brush up the floor a little, with a dustpan and small whiskbroom, but soon dropped those implements exhausted, and wept again in helpless shame. I, the ceaselessly industrious, could do no work of any kind. I was so weak that the knife and fork sank from my hands-too tired to eat. I could not read nor write nor paint nor sew nor talk nor listen to talking, nor anything. I lay on the lounge and wept all day. The tears ran down into my ears on either side. I went to bed crying, woke in the night crying, sat on the edge of the bed in the morning and cried-from sheer continuous pain. Not physical, the doctors examined me and found nothing the matter.1 It was 1885 and Charlotte Perkins Stetson had just given birth to a daughter, Katherine. "Of all angelic babies that darling was the best, a heavenly baby." And yet young Mrs. Stetson wept and wept, and when she nursed her baby "the tears ran down on my breast. . . ." The doctors told her she had "nervous prostration." To her it felt like "a sort of gray fog [had] drifted across my mind, a cloud that grew and darkened." The fog never entirely lifted from the life of Charlotte Perkins Stetson (later Gilman). Years later, in the midst of an active career as a feminist writer and lecturer, she would find herself overcome by the same lassitude, incapable of making the smallest decision, mentally numb. Paralysis struck Charlotte Perkins Gilman when she was only twenty-five years old, energetic and intelligent, a woman who seemed to have her life open before her. It hit young Jane Addams-the famous social reformer-at the same time of life. Addams was affluent, well-educated for a girl, ambitious to study medicine. Then, in 1881, at the age of twenty-one, she fell into a "nervous depression" which paralyzed her for seven years and haunted her long after she began her work at Hull-House in the Chicago slums. She was gripped by "a sense of futility, of misdirected energy" and was conscious of her estrangement from "the active, emotional life" within the family which had automatically embraced earlier generations of women. "It was doubtless true," she later wrote "that I was 'Weary of myself and sick of asking What I am and what I ought to be.'" Margaret Sanger-the birth control crusader-was another case. She was twenty years old, happily married, and, physically at least, seemed to be making a good recovery from tuberculosis. Suddenly she stopped getting out of bed, refused to talk. In the outside world, Theodore Roosevelt was running for President on the theme of the "strenuous life." But when relatives asked Margaret Sanger what she would like to do, she could only say, "Nothing." "Where would you like to go?" they persisted: "Nowhere." Ellen Swallow (later Ellen Richards-founder of the early-twentieth-century domestic science movement) succumbed when she was twenty-four. She was an energetic, even compulsive, young woman; and, like Addams, felt estranged from the intensely domestic life her mother had led. Returning home from a brief period of independence, she found herself almost too weak to do household chores. "Lay down sick . . ." she entered in her diary, "Oh so tired . . ." and on another day, "Wretched," and again, "tired." It was as if they had come to the brink of adult life and then refused to go on. They stopped in their tracks, paralyzed. The problem wasn't a lack of things to do. Charlotte Perkins Gilman, like Jane Addams, felt "intense shame" that she was not up and about. All of them had family responsibilities to meet; all but Jane Addams had houses to run. They werEnglish, Deirdre is the author of 'For Her Own Good Two Centuries of Experts' Advice to Women', published 2005 under ISBN 9781400078004 and ISBN 1400078008.