Five Families The Rise, Decline, And Resurgence of America's Most Powerful Mafia Empires 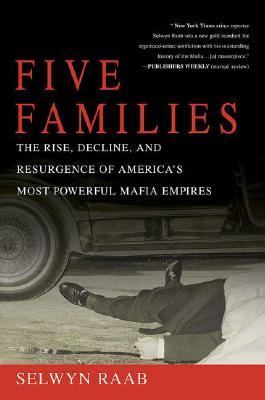 Chapter One A Fiery Saint "If I betray my friends and our family, I and my soul will burn in hell like this saint." As Tony Accetturo recited this grave oath, the holy picture in his hand perished in flames. A cluster of nodding, stone-faced men lined up to embrace him, kiss him on the cheek, and vigorously shake his hand, a collective gesture of solemn congratulations. For Accetturo, it was the most memorable moment of his life. The ceremony burnt into his soul; his prime ambition was fulfilled. He was now the newest member of an exclusive, secret coterie: he was a "made" man in the American Mafia. Twenty years of faithful service, first as a stern loan-shark enforcer and later as a major "earner," moneymaker, for important mobsters in New Jersey, had paid off bountifully for Accetturo. Earlier that afternoon, he intuitively grasped that this day would be significant. His orders were to rendezvous with Joe Abate, a reclusive figure who rarely met face-to-face with underlings, even though their lucrative extortion, gambling, and loan-sharking rackets enriched him. Abate, a sagacious capo in a borgata or brugardMafia slang for a criminal gang that is derived from the Sicilian word for a close-knit community or hamletsupervised all operations in New Jersey for the Lucchese crime family. Abate was waiting for Accetturo at a prearranged spot in the bustling Port Authority Bus Terminal in Midtown Manhattan. As a capo or captain, Abate was the impresario for more than one hundred gangsters, who illegally harvested millions of dollars every year for themselves and, as a tithe, sent a portion of their earnings to the administration, the Lucchese family leaders across the Hudson River in New York. Already in his mid-seventies, Abate bore no resemblance to a pensioner. Tall, lean, almost ramrod erect, he greeted Accetturo with a perfunctory handshake and walked briskly from the bus terminal. On that June afternoon in 1976, there was little conversation as Accetturo, almost forty years younger than his capo, quickened his pace to keep in step with the energetic older man. Accetturo, a strapping, muscular two hundred pounds on a five-feet eight-inch frame, knew from a bitter encounter with Abate never to initiate small talk with him. Among New Jersey mafiosi, Joe Abate was a feared presence, a veteran combatant with an exalted aura. He had been a gunslinger for Al Capone in Chicago when Capone was America's most notorious gangster in the 1920s. And in Abate's presence, it was prudent to answer his questions directly and to carry out his commands without hesitation. Several blocks from the bus terminal, at a clothing factory in Manhattan's Garment Center, Abate introduced Accetturo to a grim-faced man who would drive them to another location. He was Andimo "Tom" Pappadio, an important soldier responsible for handling the Lucchese's extensive labor extortions, bookmaking, and loan-sharking rackets in the Garment Center. Like the brief walk to the Garment District, the thirty-minute drive was a silent trip until they pulled up in front of a simple frame house. Unfamiliar with much of New York, Accetturo thought they were in the Bronx, the borough just north of Manhattan. Inside a drab living room, several men unknown to Accetturo were waiting and one of them introduced himself as Tony Corallo. Accetturo knew that in the insular planet of the Mafia, this unsmiling, short, stocky man in his sixties was widely recognized by another name, "Tony Ducks." And he keenly understood what that name represented. Antonio Corallo, whose nickname originated from a lifetime of evading arrests and subpoenas, was the boss of the entire Lucchese family. The small group of menRaab, Selwyn is the author of 'Five Families The Rise, Decline, And Resurgence of America's Most Powerful Mafia Empires', published 2006 under ISBN 9780312361815 and ISBN 0312361815.