Fine Just the Way It Is: Wyoming Stories 3 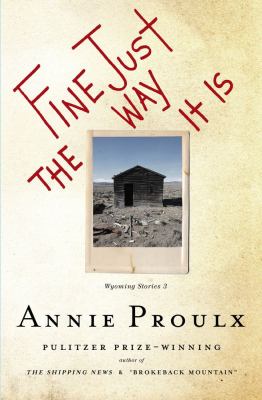 Family ManThe Mellowhorn Home was a rambling one-story log building identifying itself as western -- the furniture upholstered in fabrics with geometric "Indian" designs, lampshades sporting buckskin fringe. On the walls hung Mr. Mellowhorn's mounted mule deer heads and a two-man crosscut saw.It was the time of year when Berenice Pann became conscious of the earth's dark turning, not a good time, she thought, to be starting a job, especially one as depressing as caring for elderly ranch widows. But she took what she could get. There were not many men in the Mellowhorn Retirement Home, and those few were so set upon by the women that Berenice pitied them. She had believed the sex drive faded in the elderly, but these crones vied for the favors of palsied men with beef jerky arms. The men could take their pick of shapeless housecoats and flowery skeletons.Three deceased and stuffed Mellowhorn dogs stood in strategic guard positions -- near the front door, at the foot of the stairs, and beside the rustic bar made from old fence posts. Small signs, the product of the pyrographer's art, preserved their names: Joker, Bugs and Henry. At least, thought Berenice, patting Henry's head, the Home had a view of the enclosing mountains. It had rained all day and now, in the stiffening gloom, tufts of bunchgrass showed up like bleached hair. Down along an old irrigation ditch willows made a ragged line of somber maroon, and the stock pond at the bottom of the hill was as flat as zinc. She went to another window to look at coming weather. In the northwest a wedge of sky, milk-white and chill, herded the rain before it. An old man sat at the community room window staring out at the grey autumn. Berenice knew his name, knew all their names; Ray Forkenbrock."Get you something, Mr. Forkenbrock?" She made a point of prefacing the names of residents with the appropriate honorifics, something the rest of the staff did not do, slinging around first names as though they'd all grown up together. Deb Slaver was familiar to a fault, chumming up with "Sammy," and "Rita" and "Delia," punctuated with "Hon," "Sweetie" and "Babes.""Yeah," he said. He spoke with long pauses between sentences, a slow unfurling of words that made Berenice want to jump in with word suggestions."Get me the hell out a here," he said."Get me a horse," he said."Get me seventy year back a ways," said Mr. Forkenbrock."I can't do that, but I can get you a nice cup of tea. And it'll be Social Hour in ten minutes," she said.She couldn't quite meet his stare. He was something to look at, despite an ordinary face with infolded lips, a scrawny neck. It was the eyes. They were very large and wide open and of the palest, palest blue, the color of ice chipped with a pick, faint blue with crystalline rays. In photographs they appeared white like the eyes of Roman statues, saved from that blind stare only by the black dots of pupils. When he looked at you, thought Berenice, you could not understand a word he said for being fixed by those strange white eyes. She did not like him but pretended she did. Women had to pretend to like men and to admire the things they liked. Her own sister had married a man who was interested in rocks and now she had to drag around deserts and steep mountains with him.At Social Hour the residents could have drinks and crackers smeared with cheese paste from the Super Wal-Mart where Cook shopped. They were all lushes, homing in on the whiskey bottle. Chauncey Mellowhorn, who had built the Mellowhorn Retirement Home and set all policy, believed that the last feeble years should be enjoyed, and promoted smoking, drinking, lascivious television programs and plenty of cheap food. Neither teetotalers nor bible thumpers signed up for the Mellowhorn Retirement Home.Ray Forkenbrock said nothing. Berenice thought he looked sad and she wanted to cheer him up in some way."What did you used to do, Mr. ForkenbProulx, Annie is the author of 'Fine Just the Way It Is: Wyoming Stories 3', published 2008 under ISBN 9781416571667 and ISBN 1416571663.

9 from $1.98
Loading marketplace prices 9 copies from $1.98 How does the rental process work?
View more