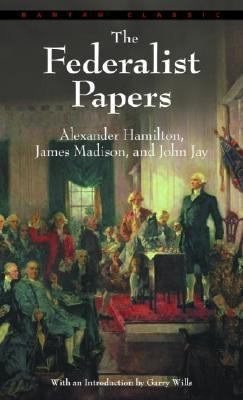 The Federalist No. 1: Hamilton October 27, 1787 To the People of the State of New York. After an unequivocal experience of the inefficacy of the subsisting Federal Government, you are called upon to deliberate on a new Constitution for the United States of America. The subject speaks its own importance; comprehending in its consequences, nothing less than the existence of the Union, the safety and welfare of the parts of which it is composed, the fate of an empire, in many respects, the most interesting in the world. It has been frequently remarked, that it seems to have been reserved to the people of this country, by their conduct and example, to decide the important question, whether societies of men are really capable or not, of establishing good government from reflection and choice, or whether they are forever destined to depend, for their political constitutions, on accident and force. If there be any truth in the remark, the crisis, at which we are arrived, may with propriety be regarded as the ara in which that decision is to be made; and a wrong election of the part we shall act, may, in this view, deserve to be considered as the general misfortune of mankind. This idea will add the inducements of philanthropy to those of patriotism to heighten the solicitude, which all considerate and good men must feel for the event. Happy will it be if our choice should be directed by a judicious estimate of our true interests, unperplexed and unbiassed by considerations not connected with the public good. But this is a thing more ardently to be wished than seriously to be expected. The plan offered to our deliberations, affects too many particular interests, innovates upon too many local institutions, not to involve in its discussion a variety of objects foreign to its merits, and of views, passions and prejudices little favourable to the discovery of truth. Among the most formidable of the obstacles which the new Constitution will have to encounter, may readily be distinguished the obvious interest of a certain class of men in every State to resist all changes which may hazard a diminution of the power, emolument and consequence of the offices they hold under the State-establishments-and the perverted ambition of another class of men, who will either hope to aggrandise themselves by the confusions of their country, or will flatter themselves with fairer prospects of elevation from the subdivision of the empire into several partial confederacies, than from its union under one government. It is not, however, my design to dwell upon observations of this nature. I am well aware that it would be disingenuous to resolve indiscriminately the opposition of any set of men (merely because their situations might subject them to suspicion) into interested or ambitious views: Candour will oblige us to admit, that even such men may be actuated by upright intentions; and it cannot be doubted that much of the opposition which has made its appearance, or may hereafter make its appearance, will spring from sources, blameless at least, if not respectable, the honest errors of minds led astray by preconceived jealousies and fears. So numerous indeed and so powerful are the causes, which serve to give a false bias to the judgment, that we upon many occasions, see wise and good men on the wrong as well as on the right side of questions, of the first magnitude to society. This circumstance, if duly attended to, would furnish a lesson of moderation to those, who are ever so much persuaded of their being in the right, in any controversy. And a further reason for caution, in this respect, might be drawn from the reflection, that we are not always sure, that those who advocate the truth are influenced by purer principles than their antagonists. Ambition, avarice, personal animosity, party opposition, and many other motives, not more laudable than these, are apt to operate as well upon those who suppHamilton, Alexander is the author of 'Federalist Papers', published 1982 under ISBN 9780553213409 and ISBN 0553213407.