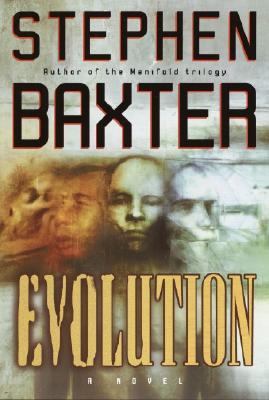 dinosaur dreams Montana, North America. Circa 65 million years before present. I At the edge of the clearing, Purga crept out of a dense patch of ferns. It was night, but there was plenty of light--not from the Moon, but from the comet whose spectacular tail spread across the cloudless sky, washing out all but the brightest stars. This scrap of forest lay in a broad, shallow lowland between new volcanic mountains to the west--the mountains that would become the Rockies--and the Appalachian plains to the east. Tonight the damp air was clear; but often mists and fogs blew in from the south, born over the great inland sea that still pushed deep into the heart of North America. The forest was dominated by plants that could extract moisture from the air: Lichen coated the gnarled bark of the araucaria trees, and even the low magnolia shrubs dripped with moss. It was as if the forest had been coated with a layer of thick green paint. But everywhere the leaves were soured, the moss and ground cover ferns browned. The rains, poisoned by gases from the great volcanic convulsion to the west, had been hard on plants and animals alike. It wasn't a healthy time. Still, in the clearing, dinosaurs dreamed. The thick night dew glistening from their yellow-black armor, ankylosaurs had gathered in a defensive circle, their young at the center. In the gentle Cretaceous air, these cold-blooded giants stood like parked tanks. In the milky light Purga's large black eyes had fixed on a moth. The insect sat on a leaf, brown wings folded, fat and complacent. With an efficient lunge Purga caught her prey in her paws. She severed off the wings with a couple of nips of her tiny incisors. Then, with a noise like the crunch of a tiny apple, she began to munch with relish at the moth's abdomen. For this brief moment, with food in her mouth, Purga found a scrap of contentment in her crowded, difficult life. The moth quickly died, its sparklike awareness incapable of recording much pain. The moth consumed, Purga moved on. There was no grass cover here--the grasses had yet to dominate the land--but there was a green covering of low ferns, mosses, ground pine, horsetails, and conifer seedlings, even a few gaudy purple flowers. Through this tangle, scuttling between scraps of cover, she was able to progress almost silently. In the dark, solitary foraging was the best strategy. Predators worked by ambush, exploiting the shadows of the night; no group could have been as invisible as a lone prowler. And so Purga worked alone. To Purga the world was a plain picked out in black, white, and blue, lit up by the uneasy light of the comet, which shone behind high scattered clouds. Her huge eyes were not as sensitive to color as the best dinosaur designs--some raptors could make out colors beyond anything that would be visible to humans, somber infrareds and sparkling ultraviolets--but Purga's vision worked well in the low light of night. And besides she had her whiskers, which fanned out before her like a tactile radar sweep. Purga looked more rodentlike than primate, with whiskers, a pointed snout, and small folded-back ears. She was about the size of a small bush baby. On the ground she walked on all fours, and she carried her long bushy tail behind her, like a squirrel. To human eyes she would have seemed strange, almost reptilian in her stillness and watchfulness, perhaps incomplete. But, as Joan Useb would one day learn, she was indeed a primate, a progenitor of that great class of animals. Through her brief life flowed a molecular river with its source in the deepest past, its destination the sea of the furthest future. And from that river of genes, widening and modifying as thousands of millennia passed, would one day emerge all of humanity: Every human ever born would be descended from the children of Purga. She knew none of this. She didn't give herself a name. SheBaxter, Stephen is the author of 'Evolution', published 2003 under ISBN 9780345457820 and ISBN 034545782X.