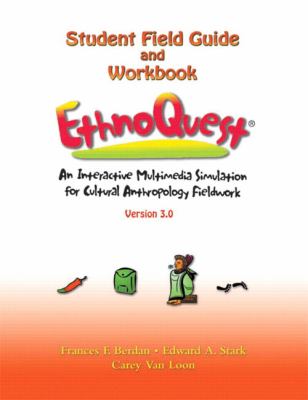 To paraphrase a catchy phrase from Adventures in Fugawiland , EthnoQuest has been years in the making (Price and Gebauer 1996:iii, Mayfield Publishing Company). We began with a germ of an idea in 1996 and have worked together as a team throughout the development and production of this program. As the project grew and became more complex and time-consuming, Alysha Timmons added her considerable computer skills to expertly program modules 7-10 and refine the prior modules, and we are especially appreciative of her extraordinary abilities and enjoyable collegiality. Edwin Mercado provided the initial programming of modules 5 and 6 and served as graphic artist for modules 5-10, and we are most grateful for his enthusiastic and timely commitment to this project. A project of this scope and complexity requires the commitment, confidence, and support of many people beyond the core team. Initial support for the program (both moral and financial) came from Dr. Rowena Santiago, Director of the Teaching Resource Center at California State University San Bernardino. Support by that center has continued throughout this project, also under the interim direction of Dr. Josephine Mendoza in 1998-99. Early on, as we stumbled around in uncharted territory, it was Dr. Gerard L. Hanley and Jan Boucher of the California State University Long Beach Center for Usability Design in Assessment (CUDA) who steered us in a productive and workable direction. We owe them a strong debt of gratitude for helping us launch this project. Major funding for this project has been provided by a grant from the National Endowment for the Humanities, an independent federal agency (grant # ED-21414-99); we are especially grateful for the very positive support and advice from Judy Jeffrey Howard, Jerri Shepherd, and Ralph Canevali of the NEH. Dr. Louis Fernandez, Provost of CSUSB, Dr. John Conley, Dean of the College of Social and Behavioral Sciences at CSUSB, and Michael Ross, Director of Academic Computing and Media, kept the project afloat when we really needed the help. We are truly grateful to them for their strong support, good humor, and generosity. Dr. Fernandez also offered his theatrical skills as Samuel Pescadero in the program, as did Michael Ross in the role of Esteban Caballero. The search for matching funds was a challenge: In addition to the generous and unwavering support of the above-mentioned Dr. Fernandez and Dr. Conley, we also greatly appreciate the efforts of Dr. William Aguilar (Vice President of Information Resources and Technology, CSUSB), Dr. David DeMauro (Vice President of Administration and Finance, CSUSB), Lisa Jolly (Director of Development for the College of Social and Behavioral Sciences at CSUSB), Elva Salgado (Director of Development for Information Resources and Technology), and a special thanks to Stephen Veneziani of NEH. And we are ever appreciative of the good-humored support and ready advice from Stan Stanley of the CSUSB Foundation. We also are indebted to Dr. Russell J. Barber and Dr. Peter T. Robertshaw, successive chairs of the Department of Anthropology at CSUSB. Dr. Barber provided us with valuable feedback, and Dr. Robertshaw became involved as the irrepressible Bronislaw Edmund Radcliffe-Pritchard (a name of his coinage). We also received support from Dr. Julius Kaplan and Dr. Keith Johnson of the CSUSB Office of Graduate Studies and Faculty Development/Research & Sponsored Programs, and from Dr. Susan Cooper and Michael Ross, successive Directors of the CSUSB Department of Academic Computing and Media. Further valuable advice and support were provided by Dr. James Pierson of the CSUSB Department of Anthropology, Dr. Daniel Whitaker of the CSUSB Foreign Languages Department, and Dr. Alan Sandstrom of the Indiana University-Purdue University Fort Wayne Anthropology Department. Dr. Sandstrom also provided us with some of the background photographs. We also express our appreciation to Kim TurpinCarey Van Loon is the author of 'EthnoQuest(R): An Interactive Multimedia Simulation for Cultural Anthropology Fieldwork, Version 3.0(BK & CD-Rom)', published 2004 under ISBN 9780131850132 and ISBN 013185013X.