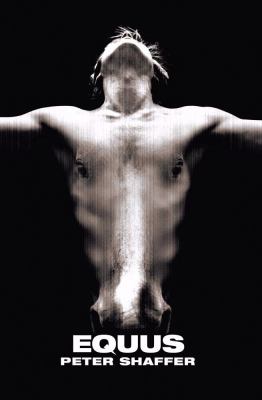 ACT ONE Darkness.Silence.Dim light up on the square. In a spotlight stands Alan Strang, a lean boy of seventeen, in sweater and jeans. In front of him, the horse nugget. Alan's pose represents a contour of great tenderness: his head is pressed against the shoulder of the horse, his hands stretching up to fondle its head.The horse in turn nuzzles his neck.The flame of a cigarette lighter jumps in the dark. Lights come up slowly on the circle. On the left bench, downstage, Martin Dysart, smoking. A man in his mid-forties.Dysart: With one particular horse, called Nugget, he embraces. The animal digs its sweaty brow into his cheek, and they stand in the dark for an hour -- like a necking couple. And of all nonsensical things -- I keep thinking about the horse! Not the boy: the horse, and what it may be trying to do. I keep seeing that huge head kissing him with its chained mouth. Nudging through the metal some desire absolutely irrelevant to filling its belly or propagating its own kind. What desire could that be? Not to stay a horse any longer? Not to remain reined up for ever in those particular genetic strings? Is it possible, at certain moments we cannot imagine, a horse can add its sufferings together -- the non-stop jerks and jabs that are its daily life -- and turn them into grief? What use is grief to a horse?[Alan leads Nugget out of the square and they disappear together up the tunnel, the horse's hooves scraping delicately on the wood.Dysart rises, and addresses both the large audience in the theatre and the smaller one on stage.]You see, I'm lost. What use, I should be asking, are questions like these to an overworked psychiatrist in a provincial hospital? They're worse than useless; they are, in fact, subversive.[He enters the square. The light grows brighter.]The thing is, I'm desperate. You see, I'm wearing that horse's head myself. That's the feeling. All reined up in old language and old assumptions, straining to jump clean-hoofed on to a whole new track of being I only suspect is there. I can't see it, because my educated, average head is being held at the wrong angle. I can't jump because the bit forbids it, and my own basic force -- my horsepower, if you like -- is too little. The only thing I know for sure is this: a horse's head is finally unknowable to me. Yet I handle children's heads -- which I must presume to be more complicated, at least in the area of my chief concern...In a way, it has nothing to do with this boy. The doubts have been there for years, piling up steadily in this dreary place. It's only the extremity of this case that's made them active. I know that. The extremity is the point! All the same, whatever the reason, they are now, these doubts, not just vaguely worrying -- but intolerable...I'm sorry. I'm not making much sense. Let me start properly; in order. It began one Monday last month, with Hesther's visit. Copyright 1973, 1974 by Peter ShafferCopyright renewed 2001, 2002 by Peter ShafferShaffer, Peter is the author of 'Equus', published 2005 under ISBN 9780743287302 and ISBN 0743287304.