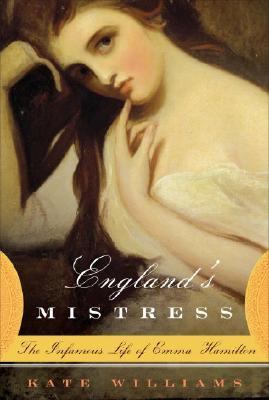 CHAPTER 1 Harsh Beginnings Emma Hamilton was born Amy Lyon on Friday, April 26, 1765, into squalid poverty. Ness was a ramshackle huddle of thirty or so miners' hovels set in scrubby, stony, infertile land. Moored on the Wirral peninsula in Cheshire, just over twelve miles from Liverpool, near England's northwest coast, the village now gleams with luxurious houses for commuters, but for a girl child in the eighteenth century, it was a one-way ticket to misery. The Stanley family, the owners of the area around Ness, reclined in elegant splendor at nearby Hooton Hall, ignoring the miners and the few fishermen scraping out a miserable living by the bleak shore. Ness was at the forefront of the burgeoning industrial revolution, and Amy was destined for a cruel and meager life: backbreaking labor by the age of ten, a hard marriage, and an early death. Baby Amy owed her very existence to coalthe black gold of the eighteenth century. For the first half of the century, the factories, sweatshops, and businesses in nearby Chester and the surrounding area had been powered by coal shipped in from North Wales along the connecting Dee estuary, but the waterway was silting up and Welsh coal was growing very expensive. When reserves were discovered in 1750 at nearby Denhall, the landscape of Ness changed forever, from an area only sparsely populated by fishermen and the odd farmer to a mini Wild West town teeming with investors and get-rich-quick merchants. After the Stanleys finally opened their mine to huge excitement in the late 1750s, cartloads of brawny young colliers arrived from Lancashire, Staffordshire, and North Wales. Others trekked over from Ireland to build a quay for exporting the coal, and laborers came to build the Stanleys' new mansion on the banks of the River Dee. Ness was designated as the village to house them, and quickly built, cheap cottages mushroomed on the stony fields. In this brand-new village, much of it still a building site, twenty-one-year- old Mary Kidd arrived in 1764. Since there were five men to every woman in Ness, she was guaranteed to be popular. Ness's men were hardened by dangerous work. Conditions at the Denhall mine were notoriously poor, and they had to crouch in muddy, icy water and hack at the sides of the flooded tunnels. Mice and cockroaches scampered into their pockets to eat their food, especially if they worked near the areas where the pit ponies were stabled. Once extracted, the coal was loaded into boats roped together in sets of four or five on the underground canals. Miners lay on the boats and "walked" their feet along the ceilings of the tunnels to push the boats to the bottom of the shaft, where the coal was hoisted up. Men of twenty were bent and crabbed within a few years of beginning work, and others were dead, poisoned by pockets of methane gas or killed by rock falls. Emma's mother had traveled from Hawarden, a small village just outside Chester across the Dee. She was in Ness for a holiday of sorts. William Kidd, Mary's elder brother, had moved to Ness and was working as a miner. Banns were published for his marriage to Mary Foulkes, a Chester girl, in January 1763, and their first son, Samuel, was born in the spring of 1764 and christened on April 15. In the eighteenth century, every available female relative was roped in to help with a new baby, and so Mary traveled to Ness around the time of Samuel's birth to be an unpaid nursemaid, cleaner, and cook to her brother and a sister-in-law she hardly knew. On the ferry across the Dee between Flint, near Hawarden, and Parkgate, and then the walk to her brother's home, Mary was excited, buoyant with holiday spirit. Ness was the first place she had seen other than her dead-end home town, and she was determined to make the most of it. Having escaped her other siblings, dreary cottage, and anWilliams, Kate is the author of 'England's Mistress The Infamous Life of Emma Hamilton', published 2006 under ISBN 9780345461940 and ISBN 0345461940.

6 from $1.98
Loading marketplace prices 6 copies from $1.98 How does the rental process work?
View more