End Is Just the Beginning Lessons in Grieving for African Americans 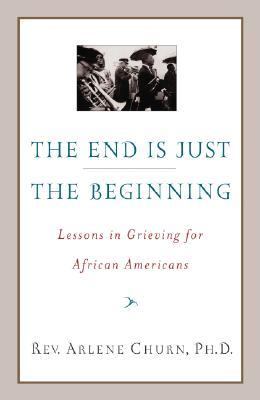 ONE Regret and Denial For my life is spent with grief and my years with sighing. PSALM 31:10a My mother! She was my personal possession. I would never have another mother--only one biological mother per lifetime--and mine was gone, suddenly, at the age of fifty-six, the result of a medical mishap. She had gone into the hospital for the removal of a small growth on her gum, so that her dentures would fit properly. Yet, for reasons unknown, she went into cardiac arrest and lay in a coma for nine days. From Washington, D.C., where I was living at the time, I rushed to her bedside in Philadelphia and stayed there around the clock, praying for a miracle of healing and the restoration of health. And while I prayed, I also reflected on the years following the death of my grandmother, during which the relationship between my mother and me had been so strained. My mother, Theresa, had been a young widow with two little girls to raise on her own when my grandmother insisted that we come to live with her. At that point, Grandmother took total charge and control of our lives. My mother was her only child and she looked upon all three of us as "her girls." As a result, my mother had always felt she'd been denied the opportunity to raise her daughters as she saw fit, and my grandmother, on her part, had always felt that her daughter lacked what we now call "parenting skills." Grandmother provided us with a wonderful lifestyle and never begrudged us anything. However, she was disappointed that my mother chose not to be involved in the businesses she had established--her beauty school and rental properties. I, on the other hand, was in awe of all my grandmother did, and I became her little partner. She was my best friend and my playmate. I was with her constantly, and my mother knew enough not to interfere with our special relationship and bond. Now, while maintaining my bedside vigil, I thought about our past lack of appreciation for each other's individuality. I had wanted my mother to be like my grandmother, who was strong and assertive and who transformed the impossible dream for an African American woman into a vision of reality. She was successful in business and had a passion for motivating others to chart their own life's course on the path of excellence. She refused to accept limitations based on gender or race, and she willingly accepted being misunderstood and misjudged as the price she had to pay for her success. My grandmother was generous to a fault and never complained, even when she was taken advantage of, because she believed strongly that if your heart is in the right place, the giver is never the loser. My mother was completely different. Soft-spoken, meek, and humorous, she held no high aspirations for her life. "Just live and let live" was her motto. She enjoyed her friends and the things they did together--weekly card games, going to weekend dances, and simply having good, clean fun. And she never really understood the lasting impact my grandmother had made on my life. She didn't know about the countless conversations we'd had, during which my grandmother had encouraged me to accept life's challenge to exceed society's expectations and the limitations it placed on Negro women. Grandmother never rewarded me for being on the honor roll because my achievement was no more than she'd expected, yet she was proud of me and enjoyed boasting about my grades and school honors to anyone who would listen. At an early age, I felt the call to be a minister. I wanted to be an articulate female proclaimer in ministry. My mother was appalled by this choice, but my grandmother was thrilled for me. She prayed with me and gave me guidance, encouragement, and support. She also tried to prepare me for the obstacles I'd face if I pursued this calling, and insisted that I get as much education as possible. She told me I could succeed at my chosen vocChurn, Arlene H. is the author of 'End Is Just the Beginning Lessons in Grieving for African Americans', published 2003 under ISBN 9780767910156 and ISBN 076791015X.