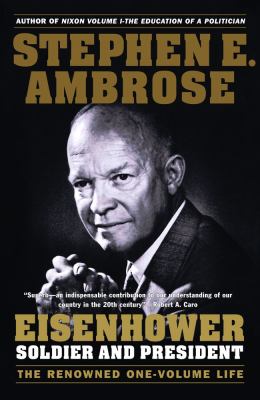 Chapter 1 Abilene, West Point, World War IHe was born on October 14, 1890, in a small rented frame house, not much more than a shack, beside the railroad tracks in Denison, Texas. He was the third son of David and Ida Stover Eisenhower. They were members of the Mennonites, fundamentalists in their religion, and pacifists. David was a common laborer -- he had once owned a general store in Hope, Kansas, purchased with an inheritance from his father, but it had failed. In 1891 he moved to Abilene, Kansas, where a relative had found him a job as a mechanic at the Belle Springs Creamery. When the Eisenhowers stepped onto the train platform in Abilene, David had in his pocket the sum total of his capital, $10.In a small two-story white frame house at 201 South East Fourth Street, set on a three-acre plot, David and Ida raised six strong, healthy boys -- Arthur (born 1886), Edgar (1889), Dwight, Roy (1892), Earl (1898), and Milton (1899). The Eisenhowers were respected around town, but the family was in no way prominent. David held no elective office, provided no community leadership. Still the Eisenhowers were content. The parents were frugal out of necessity, but they were proud and ambitious, if not for themselves, then for their sons."I have found out in later years we were very poor," Dwight said on June 4, 1952, on the occasion of laying the cornerstone of the Eisenhower Museum in Abilene, across the street from his boyhood home, "but the glory of America is that we didn't know it then. All that we knew was that our parents -- of great courage -- could say to us, 'Opportunity is all about you. Reach out and take it.'"By most standards, David and Ida never reached out to take that opportunity themselves. Instead they invested in their sons the hopes they once had for themselves. They taught the simple virtues of honesty, self-reliance, integrity, fear of God, and ambition. They wanted their sons to succeed in a wider setting than Abilene, or even Kansas. They gave the boys the feeling, as one of them later put it, that "if you stay home you will always be looked upon as a boy."Eisenhower's home life revolved around worship. Every day, morning and night, the family members got down on their knees to pray. David read from the Bible before meals, then asked for a blessing. After the meals the boys washed the dishes, then gathered around David for Bible reading. "Finally there was bedtime," Earl recalled, "when Dad got up and wound the clock on the wall. You could hear the ticking no matter where you were. When Dad started winding, you might as well get ready for bed, for that was the bedtime signal."During the day, the boys saw little of their father, who worked in the creamery from 6:00 A.M. to 6:00 P.M. "Mother was by far the greatest personal influence in our lives," Dwight remembered. She supervised their chores, made their meals, selected and mended their clothes, soothed their hurts, praised their accomplishments, and lightened the atmosphere. Milton, the youngest, said that "Father and Mother complemented one another. Mother had the personality. She had the joy. She had a song in her heart. Dad had the authority."In a family of six boys, competition was the natural order of things. Who could do the best job at this or that task? Who could run the fastest? Jump the highest? Lift the heaviest weight? Read the Bible aloud most accurately? Daily, in countless ways, the boys tested themselves against one another. David and Ida encouraged this competition, encouraged them to be ambitious to do the best. Most of all, each of the boys wanted to be the toughest, and they fought among themselves to find out who was the best scrapper.One day Ida was baking in the kitchen. Dwight and Edgar began a fight on the kitchen floor. Soon the older and heavier Edgar was sitting astride the prostrate Dwight, giving him a pounding. "Give up?" Edgar shouted. "No!" Dwight gasped. Edgar gAmbrose, Stephen E. is the author of 'Eisenhower Soldier and President', published 1991 under ISBN 9780671747589 and ISBN 0671747584.