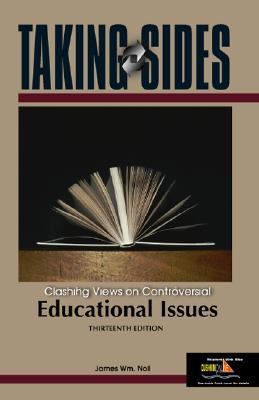 PART 1. Enduring Issues ISSUE 1. Should Schooling Be Based on Social Experiences? YES: John Dewey, from Experience and Education (Macmillan, 1938) NO: Robert M. Hutchins, from The Conflict in Education in a Democratic Society (Harper & Row, 1953) Philosopher John Dewey suggests a reconsideration of traditional approaches to schooling, giving fuller attention to the social developmentof the learner and the quality of his or her total experience. Robert M. Hutchins, noted educator and one-time chancellor of the University of Chicago, argues for a liberal arts education geared to thedevelopment of intellectual powers. ISSUE 2. Should the Curriculum Be Standardized for All? YES: Mortimer J. Adler, from "The Paideia Proposal: Rediscovering the Essence of Education," American School Board Journal (July 1982) NO: John Holt, from Escape From Childhood (E. P. Dutton, 1974) Philosopher Mortimer J. Adler contends that democracy is best served by a public school system that establishes uniform curricularobjectives for all students. Educator John Holt argues that an imposed curriculum damages the individual and usurps a basic human right to select one's own path ofdevelopment. ISSUE 3. Should Behaviorism Shape Educational Practices? YES: B. F. Skinner, from Beyond Freedom and Dignity (Alfred A. Knopf, 1971) NO: Carl R. Rogers, from Freedom to Learn for the Eighties (Merrill, 1983) B. F. Skinner, an influential proponent of behaviorism and professor of psychology, critiques the concept of "inner freedom" and linkslearning and motivation to the influence of external forces. Professor of psychology and psychiatry Carl R. Rogers offers the "humanistic" alternative to behaviorism, insisting on the reality ofsubjective forces in human motivation. ISSUE 4. Should Church-State Separation Be Maintained? YES: R. Freeman Butts, from "A History and Civics Lesson for All of Us," Educational Leadership (May 1987) NO: Robert L. Cord, from "Church-State Separation and the Public Schools: A Re-evaluation," Educational Leadership (May 1987) Professor emeritus of education R. Freeman Butts warns that current efforts to redefine the relationship between religion and schooling areeroding the Constitution's intent. Professor of political science Robert L. Cord offers a more accommodating interpretation of this intent, one that allows for the schoolpractices that Butts condemns as unconstitutional. ISSUE 5. Should School Attendance Be Compelled? YES: Horace Mann, from Tenth Annual Report and Twelfth Annual Report (1846 and 1848) NO: Daniel H. Pink, from "School's Out," Reason (October 2001) Horace Mann, a leader of the common school movement in the nineteenth century, presents the basic arguments for publicly funded education inwhich all citizens could participate and lays the groundwork for compulsory attendance laws. Writer-editor Daniel H. Pink declares compulsory mass schooling an aberration and finds hope in the home schooling revolution and theultimate demise of high school. PART 2. Current Fundamental Issues ISSUE 6. Can "Character Education" Reverse Moral Decline? YES: Thomas Lickona, from "The Return of Character Education," Educational Leadership (November 1993) NO: Alfie Kohn, from "How Not to Teach Values: A Critical Look at Character Education," Phi Delta Kappan (February 1997) Developmental psychologist Thomas Lickona, a leading exponent of the new character education, details the rationale behind the movement andcharts a course of action to deal with the moral decline of American youth. Writer-lecturer Alfie Kohn sees current attempts at character education as mainly a collection of exhortations and extrinsic inducementsthat avoid more penetrating efforts at social and moral development. ISSUE 7. Should Multiculturalism Permeate the Curriculum? YES: Sonia Nieto, from "What Does It Mean to Affirm Diversity?" The School Administrator (May 1999) NO: Thomas J. Famularo, from "The Intellectual Bankruptcy of Multiculturalism," USA Today Magazine, a publication of the Society for the Advancement of Education (May 1996) Professor of language, literacy, and culture Sonia Nieto examines the realities of diversity in American society that underlie an effectiveapproach to multicultural education. Former English instructor Thomas J. Famularo contends that the multiculturalism movement, rather than representing diversity, is centered onthe themes of race and gender and the debunking of Western culture. ISSUE 8. Can Federal Initiatives Rescue Failing Schools? YES: Andrew Rotherham, from "A New Partnership," Education Next (Spring 2002) NO: Peter Schrag, from "Bush's Education Fraud," The American Prospect (February 2004) Education policy expert Andrew Rotherham argues that new federally imposed accountability standards will enhance opportunity and overhaulfailing schools. Education writer-editor Peter Schrag finds the Bush Administration's No Child Left Behind act to be confusing, underfunded, and ultimately self-defeating. ISSUE 9. Do High-Stakes Assessments Improve Learning? YES: Nina Hurwitz and Sol Hurwitz, from "Tests That Count," American School Board Journal (January 2000) NO: Martin G. Brooks and Jacqueline Grennon Brooks, from "The Courage to Be Constructivist," Educational Leadership (November 1999) High school teacher Nina Hurwitz and education consultant Sol Hurwitz assemble evidence from states that are leading the movement to sethigh standards of educational performance and cautiously conclude that it could stimulate long-overdue renewal. High school superintendent Martin G. Brooks and associate professor of education Jacqueline Grennon Brooks contend that the push forstandardized state assessments constricts student learning and prevents implementation of constructivism. ISSUE 10. Have Public Schools Failed Society? YES: William J. Bennett et al., from "A Nation Still at Risk," Policy Review (July/August 1998) NO: Forrest J. Troy, from "The Myth of Our Failed Education System," The School Administrator (September 1998) Former secretary of education William J. Bennett and 36 other leaders and scholars examine the state of public schooling on the 15thanniversary of the publication of the U.S. Department of Education report A Nation at Risk and issue a new manifesto for neededreforms. Veteran newspaper editor Forrest J. (Frosty) Troy counteracts the continued criticism of the public schools with a point-by-pointpresentation of facts. PART 3. Current Specific Issues ISSUE 11. Has the Supreme Court Reconfigured American Education? YES: Charles L. Glenn, from "Fanatical Secularism," Education Next (Winter 2003) NO: Paul E. Peterson, from "Victory for Vouchers?" Commentary (September 2002) Professor of education Charles L. Glenn argues that the Supreme Court's decision in Zelman v. Simmons-Harris is an immediateantidote to the public school's secularist philosophy. ProfessorNoll, James W. is the author of 'Educational Issues', published 2004 under ISBN 9780072968903 and ISBN 0072968907.