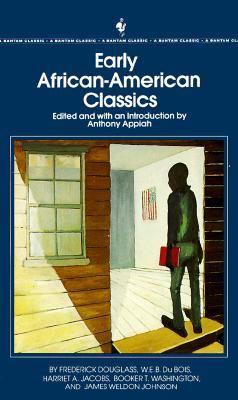 Introductionby Anthony Appiah The "American Negro," W.E.B. Du Bois writes in theSouls of Black Folk, ever feels his twonessan American, a Negro; two souls, two thoughts, two unreconciled strivings.... The history of the American Negro is the history of this strife,this longing to attain self-conscious manhood, to merge his double self into a better and truer self.... He simply wishes to make it possible for a man to be both a Negro and an American.... It is always important, then, to remember that African-American writing is American. The African-American classics gathered hereFrederick Douglass's 1845Narrative, Harriet Jacobs'sIncidents in the Life of a Slave Girl, Booker T. Washington'sUp from Slavery, and James Weldon Johnson'sAutobiography of an Ex-Colored Manhave an American literary and cultural context without which they cannot be understood. Indeed, as we shall see, the narratives of self-fashioning that make up this book are American in their broadest outlines and their minutest details. But it is, of course, crucial too to recall that they are the writings of black men and women. In this brief introduction, I should like to point to some of the major features of these four textssome they share, some in which they differand to the cultural and literary contexts, both American, in general, and African-American in particular, that helped to form them. It is not too much to say that the popular literature of the Christian world, since the discovery of America, or, at least for the last two hundred years, has been anti-Negro.1 So wrote the West Indian black nationalist, Edward W. Blyden, inFraser's Magazinein 1875; and we know all too well that a substantial part of the "anti-Negro" argument was that "Negro" men and women could not master those "sublimer" realms of literate culture and the arts that constituted the highest aspirations of a middle-class Christian culture. The "evidence" proffered for this proposition until the middle of the nineteenth century consisted in large part of the absence of any substantial body of writing by Africans and African-Americans: the few writings by black people of which most Euro-American thinkers were aware they dismissed as derivative or derisory. Yet if we ask why so little published writing by African-Americans remains to us from before the middle of the nineteenth century, it cannot be out of place to remark that the great majority of black people in the New World until the Emancipation Proclamation were legally prohibited from learning to read and write. The literate slave who read defenses of slavery that assumed the incapacity of the Negro was thus in a double bind. He or she knew that writingand particularly writing wellwas the only effective way to refute this argument; but he or she also knew that writing was forbidden, often on paina pain the slave knew wellof the lash. The slaves-turned-writersDouglass, Jacobs, even Washingtoncame to writing with the recognition that the very fact of their writing was an act of rebellion, made more substantial by its being published. It is worth noting that the title pages of the two works that were published before emancipation carry the emphatic stipulation "written by himself," "written by herself." The major goal of these authors was to speak for black Americans, to America and, in particular, to white America. Because these narratives were addressed to an America that did not believe in the ability of the Negro, the authors thought of themselves, not only as witnesses to the condition of black people, but as exemplarsliving, breathing, and, above all, writing refutations of the slanders of racism. Even though Johnson'sAppiah, Anthony is the author of 'Early African American Classics', published 1990 under ISBN 9780553213799 and ISBN 0553213792.