Dynamics of Inequality Race, Class, Gender, and Sexuality in the United States

by Gagne, Patricia, Tewksbury, Richard A. 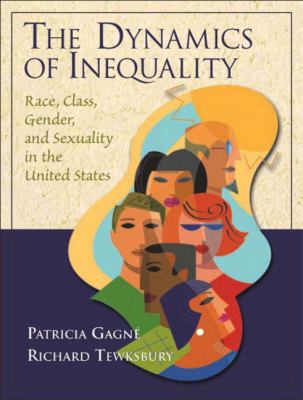 by Gagne, Patricia, Tewksbury, Richard A.

What is it about the United States that makes it so unique? It may be the freedoms U.S. citizens enjoy, yet in many democracies of the world, people enjoy similar liberties. Some say the United States offers an unparalleled standard of living, but luxury is common in many nations of the world. What makes the United States different from any other nation in the world is its cultural diversity. The United States is the only nation on earth founded by immigrants and based on the premise that all who enter U.S. borders can expect to find opportunities and freedoms that, as newcomers, they would fail to find anywhere else in the world. There are differences in the amount of wealth Americans enjoy; still, each person is constitutionally entitled to the same protections as any other citizen, regardless of race, ethnicity, national origin, religion, social class, sex, gender, or sexual orientation. And with very few exceptions, each person is legally entitled to the same opportunities as everyone else. Indeed, these are laudable ideals. But has the United States lived up to them? This book suggests that U.S. society has a long way to go before equal protection under the law and equality of opportunity are realities. The articles here give voice to the Americans that freedom and opportunity have neglected. In the first section, authors talk about their personal experiences with prejudice and discrimination, demonstrating just some of the ways that inequality is perpetuated in U.S. society today. The second section offers insights into the nation's long history of inequality based on race, ethnicity, class, gender, and sexuality. The authors discuss racial inequality and violence, lack of political liberties for women, distrust of new immigrants, and discrimination in official government policy against gay men and lesbians. The articles in the third section examine the impact of today's dominant culture in perpetuating inequality. The authors examine belief systems, stereotypes, and prejudices and discuss some of the ways that racist, sexist, classist, and homophobic biases are perpetuated by the media and certain social groups. The fourth section provides articles that explain some of the ways that inequalities have been built into the very structure of U.S. society. That section is divided into four subsections, which discuss how key social institutions--the economy, education, medicine, and legal system--perpetuate prejudice, discrimination, and inequality. In the fifth section, authors discuss some of the ways that violence against women, people of color, gay men, lesbians, and others is used to intimidate individuals and perpetuate the dominance of those who perpetrate violence against them. As these articles make clear, violence affects not only individual victims, but also all those who are intimidated from exercising their rights and freedoms for fear of attack. Since the United States was founded on principles of equality of opportunity and equal protection under the law, how is it that inequalities continue? In the sixth section, authors offer explanations for inequality based on race, class, gender, and sexuality, as well as the myriad ways in which these individual characteristics and social statures intersect with one another. Such explanations are crucial to efforts to challenge, resist, and overthrow the barriers to equality that continue to exist in U.S. society. A number of social movements of the twentieth century focused on resisting and challenging systems of domination. These and continuing efforts are the focus of the seventh section of this book. The civil rights movement made unprecedented gains in challenging the system of social, political, and economic apartheid that was part of the fabric of U.S. society. And people of color of all races benefitted from that movement's efforts. Similarly, the women's movement challenged the oppression of women, and the gay and lesbiaGagne, Patricia is the author of 'Dynamics of Inequality Race, Class, Gender, and Sexuality in the United States', published 2002 under ISBN 9780130976376 and ISBN 0130976377.