Duveen A Life in Art 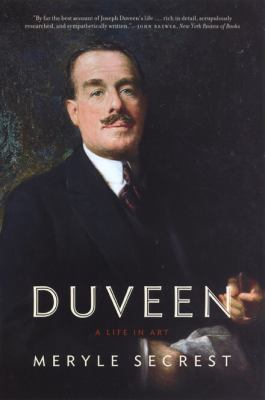 Meryle Secrest, biographer of Kenneth Clark ("Riveting . . . enthralling" -"Wall Street Journal) and Bernard Berenson ("A remarkable tour de force"-Sir Harold Acton), brings all her exceptional gifts to the story of Lord Duveen of Millbank. Her book is the first major biography in more than fifty years of the supreme international art dealer of the twentieth century and the first to make use of the enormous Duveen archive that spans a century and has, until recently, been kept under lock and key at the Metropolitan Museum of Art. The story begins with Duveen pere, a Dutch Jew immigrating to Britain in 1866, establishing a business in London, going from humble beginnings in an antiques shop to a knighthood celebrating him as one of the country's leading art dealers. Duveen pere could discern an Old Master beneath layers of discolored varnish. He perfected the chase, the subterfuges, the strategies, the double dealings. He had an uncanny ability to spot a hidden treasure. It was called "the Duveen eye." His son, Joseph, grew up with it and learned it all-and more . . . Secrest tells us how the young Duveen was motivated from the beginning by the thrill of discovery; how he ascended, at twenty-nine, to (de facto) head of the business; how he moved away from the firm's emphasis on tapestries and Chinese porcelains toward the more speculative, more lucrative, more exciting business of dealing in Old Masters. We see a demand for these paintings growing in America, fueled by the new "squillionaires" just at the moment when British aristocrats with great art collections were losing their fortunes . . . how Duveen's whole career was based on the simple observation: Europe has the art; America, the money. Secrest shows how he sold hundreds of masterpieces by Bellini, Botticelli, Giotto, Raphael, Rembrandt, Gainsborough, Watteau, Velazquez, Vermeer, and Titian, among others, by convincing such self-made Americans as Morgan, Frick, Huntington, Widener, Bache, Mellon, and Kress that ownership of great art would ennoble them, and while waving such huge sums at the already noble British owners that the art changed hands and all were happy. We discover Duveen's connection to Buckingham Palace: how when the Prince of Wales became Edward VII his first act was to call in Duveen Brothers as decorators (something had to be done with the lugubrious Victorian decor and ghastly tartan hangings); how Duveen supplied the tapestries and rugs for the coronation ceremonies in Westminster Abbey; and how, in 1933, he became Lord Duveen of Millbank. We learn about the controversies in which he became embroiled and about his legendary art espionage (a network of hotel employees spied on his clients to discover their tastes). Duveen was as generous as he was acquisitive, giving away hundreds of thousands of pounds to British institutions (the Tate Gallery, the National Portrait Gallery, the British Museum-including rooms to house the Elgin Marbles), organizing exhibitions for young artists, writing books about British art, and playing a major role in the design of the National Gallery in Washington. Meryle Secrest's "Duveen fascinates as it contributes to our understanding of art as commerce and our grasp of American and English taste in the grand manner. As Andrew Mellon once said, paintings never looked as good as they did when Duveen was standing in front of them.Secrest, Meryle is the author of 'Duveen A Life in Art', published 2005 under ISBN 9780226744155 and ISBN 0226744159.