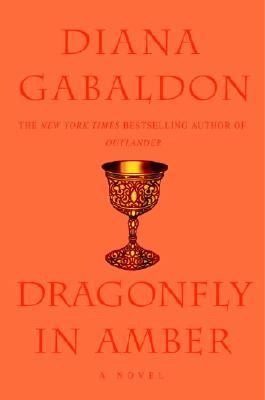 "It's only the English who are hunting Charles Stuart. It will be the English, and the clans as well, who hunt me. I am a traitor twice over, a rebel and a murderer. Claire..." Jamie paused, rubbing a hand across the back of his neck, then said gently, "Claire, I am a dead man." The tears were freezing on my cheeks, leaving icy trails that burned my skin. "No," I said again, but to no effect. "I'm no precisely inconspicuous, ye ken," he said, trying to make a joke of it as he ran a hand through the rusty locks of his hair. "Red Jamie wouldna get far, I think. But you..." He touched my mouth, tracing the line of my lips. "I can save you, Claire, and I will. That is the most important thing. But then I shall go backfor my men." "The men from Lallybroch? But how?" Jamie frowned, absently fingering the hilt of his sword as he thought. "I think I can get them away. It will be confused on the moor, wi' men and horses moving to and fro, and orders shouted and contradicted; battles are verra messy affairs. And even if it's known by then what Iwhat I have done," he continued, with a momentary catch in his voice, "there are none who would stop me then, wi' the English in sight and the battle about to begin. Aye, I can do it," he said. His voice had steadied, and his fists clenched at his sides with determination. "They will follow me without questionGod help them, that's what's brought them here! Murtagh will have gathered them for me; I shall take them and lead them from the field. If anyone tries to stop me, I shall say that I claim the right to lead my own men in battle; not even Young Simon will deny me that." He drew a deep breath, brows knit as he visualized the scene on the battlefield come morning. "I shall bring them safely away. The field is broad enough, and there are enough men that no one will realize that we havena but moved to a new position. I shall bring them off the moor, and see them set on the road toward Lallybroch." He fell silent, as though this were as far as he had thought in his plans. "And then?" I asked, not wanting to know the answer, but unable to stop myself. "And then I shall turn back to Culloden," he said, letting out his breath. He gave me an unsteady smile. "I'm no afraid to die, Sassenach." His mouth quirked wryly. "Well ... not a lot, anyway. But some of the ways of accomplishing the fact..." A brief, involuntary shudder ran through him, but he tried to keep smiling. "I doubt I should be thought worthy of the services of a true professional, but I expect in such a case, both Monsieur Forez and myself might find it ... awkward. I mean, havin' my heart cut out by someone I've shared wine with..." With a sound of incoherent distress, I flung my arms around him, holding him as tightly as I could. "It's all right," he whispered into my hair. "It's all right, Sassenach. A musket ball. Maybe a blade. It will be over quickly." I knew this was a lie; I had seen enough of battle wounds and the deaths of warriors. All that was true was that it was better than waiting for the hangman's noose. The terror that had ridden with me from Sandringham's estate rose now to high tide, choking, drowning me. My ears rang with my own pulsebeat, and my throat closed so tight that I felt I could not breathe. Then all at once, the fear left me. I could not leave him, and I would not. "Jamie," I said, into the folds of his plaid. "I'm going back with you." He started back, staring down at me. "The hell you are!" he said. "I am." I felt very calm, with no trace of doubt. "I can make a kilt of my arisaid; there are enough young boysGabaldon, Diana is the author of 'Dragonfly in Amber' with ISBN 9780385302319 and ISBN 0385302312.