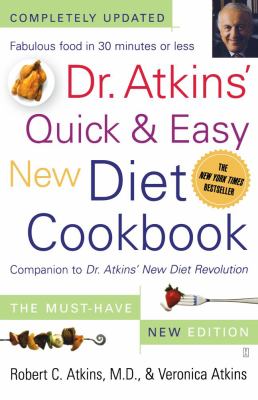 Preface to the 2004 EditionAtkins Has Become MainstreamIn the seven years since this book was first published, many things have happened. Dr. Atkins, who pioneered the controlled carbohydrate lifestyle, died after a fall in April 2003. But his legacy lives on, growing stronger every day. At the time of his death, Dr. Atkins was finally beginning to see validation of his approach to weight control and overall good health appear in numerous research studies published in prestigious medical journals. In the months that followed, a flood of equally supportive studies has continued to appear -- and be reported in the popular press -- confirming the efficacy and safety of doing Atkins.After more than thirty-five years of being considered controversial, the Atkins Nutritional Approach is moving into its rightful place in the mainstream. The last quarter of the twentieth century was dominated by the low-fat/low-calorie dietary culture -- during which, not coincidentally, rates of overweight and obesity ballooned, along with an attendant rise in the incidence of Type 2 diabetes. It appears that in the first decade of the twenty-first century the tide has turned. More and more individuals are embracing the Atkins controlled carb lifestyle while bidding good-bye to their extra pounds.The current excitement about Atkins makes it an appropriate time for this completely updated edition ofDr. Atkins' Quick & Easy New Diet Cookbook.This edition includes 50 new recipes to delight your taste buds. Among them are Almond French Toast, Quick-Grilled Chicken Caesar Salad, and Mediterranean Vegetable Soup. Many Atkins followers asked for more breakfast options, so we have created a section guaranteed to start your day right. (The names of the new recipes are listed in a different typeface at the beginning of each chapter.) We have reviewed all the recipes, making minor adjustments so they are easier to follow and the results even tastier. You'll also find updated nutritional information, including calories; grams of protein, fat, and fiber; total carbs; and Net Carbs.Net Carbs are basically the grams of carbs that remain after you subtract the grams of fiber from the total carb count. Although fiber is a form of carbohydrate, it does not impact your blood glucose level the way sugar and most other carbohydrates do. Net Carbs are the only carbs that do affect blood sugar and the only ones you need to count when you do Atkins.Finally, recipes are now coded to indicate the phases of Atkins for which they are suitable: Induction, Ongoing Weight Loss (OWL), Pre-Maintenance, and Lifetime Maintenance. In general, recipes that are appropriate for Induction contain no more than seven grams of Net Carbs per serving and do not contain fruit, fresh cheese, pasta, grains, starchy vegetables, nuts and seeds or their butters, or legumes. Those recipes that are suitable during OWL contain no more than 10 grams of Net Carbs and can include all cheeses, certain fruits, low carb pasta, and nuts and seeds and their butters. Recipes marked for Pre-Maintenance and Lifetime Maintenance may include previously restricted ingredients.We believe that these enhancements make this book even more useful while you lose unwanted weight -- and as you continue to control your carbs as a permanent lifestyle.Bon appetit!-- Stephanie Nathanson, Food Editor, Atkins Health & Medical Information ServicesCopyright 2004 by The Estate of Robert C. Atkins, M.D., and Veronica AtkinsAtkins, Robert C. is the author of 'Dr. Atkins' Quick & Easy New Diet Cookbook Companion to Dr. Atkins' New Diet Revolution', published 2004 under ISBN 9780743266468 and ISBN 0743266463.