Do You Think I'm Beautiful? The Question Every Woman Asks 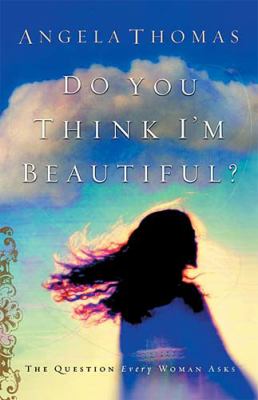 Chapter 1 ; Do You Think I'm Beautiful? ; ; ; I've worn glasses since I was eighteen months old. My first pair had cat-eye frames, and everyone thought I looked so cute in them. "Oh, look at that little baby with glasses. Isn't she the sweetest thing?" Then I began to grow, and for about a year I had to wear a patch over my right eye to make the left one stronger. I guess it was a decent idea, but it didn't work. It caused my weaker eye to become the dominant one. As an adult I could only look through a camera lens or telescope with my left eye, the one that saw 20/4000 uncorrected. And don't you know I was a stunner in the Captain Hook patch with cat-eye glasses on top? ; Eventually, in elementary school, classmates and neighborhood kids tagged me "four eyes." I was special - one of maybe three "four eyes" in the entire school. Me and my wire-rim, stop-sign-shaped glasses. How cool can a girl be with traffic signs in front of her eyes? Not very. And a few years later, for the full effect, we added three and a half years of braces. Railroad tracks. Tinsel teeth. That was mea? think bottle caps before my eyes, tin on my teeth, and - to make things as awful as possible - I was smart. In case you've forgotten, girls don't want to be smart in junior high - they want to be pretty. ; By those tender junior high years, I knew for sure that beauty had eluded me. Now my best friend, Carla, was beautiful. Some senior guys even asked her to the prom when we were in the eighth grade. The eighth grade! Can you imagine that? Carla was at the high school prom, and I was probably at home writing a paper. Yep, there were many beautiful girls at my school, but I was not among them. I could do algebra and remember the answers for history tests. I actually did all of my homework and turned it in on time. The other day, Carla reminded me that I used to make up practice tests, take the tests, and then grade them - all to prepare for the actual thing. What a dweeb! ; All I really wanted was to look like everyone else, but my circumstances wouldn't cooperate. Long, thick, straight hair that I styled with two barrettes every day of my young life. Braces that seemed destined to be a permanent part of my smile. And the doom of four eyes forever. Don't get the wrong impression no one ever called me ugly, and no one ever laughed in my face. It's just that no one ever noticed. ; The Plain One ; I have fumbled along with this beauty thing ever since those elementary days. I eventually realized that if I couldn't appeal to their visual senses, I could make people laugh and be fun enough to appeal to their hearts. I became a cheerleader and a good citizen and an all-around great friend. Steady. That's what most people called me. You could count on me to show up on time, make good decisions, and always, always try to do the right thing. I was the one you could snub one day and embrace the next without so much as an apology. There were no boyfriends to distract me from my friends or academics, and, besides, who doesn't need a girlfriend as faithful as a golden retriever? As long as they'd pat me on the head every once in a while, I'd run and fetch and do just about anything to please. ; Every Sunday on the way to church, my daddy would say that he had the prettiest daughter in the whole wide world. I know; it was sweet. But that's what dads are supposed to say. I heard him and have held on to his words even to this day, but deep down, back then, I didn't believe him. If I were really pretty, I reasoned, then someone besides my father would notice. But no one ever did. ; When complimeThomas, Angela is the author of 'Do You Think I'm Beautiful? The Question Every Woman Asks' with ISBN 9780785263555 and ISBN 0785263551.