Demon in the Freezer A True Story 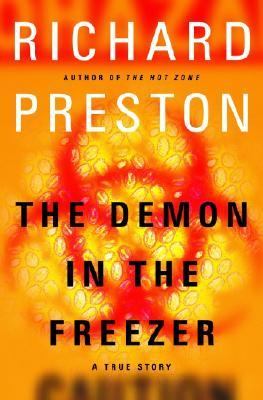 Chapter 1 Something in the Air Journey Inward OCTOBER 2-6, 2001 In the early nineteen seventies, a British photo retoucher named Robert Stevens arrived in south Florida to take a job at the National Enquirer, which is published in Palm Beach County. At the time, photo retouchers for supermarket tabloids used an airbrush (nowadays they use computers) to clarify news photographs of world leaders shaking hands with aliens or to give more punch to pictures of six-month-old babies who weigh three hundred pounds. Stevens was reputed to be one of the best photo retouchers in the business. The Enquirer was moving away from stories like "I Ate My Mother-in-Law's Head," and the editors recruited him to bring some class to the paper. They offered him much more than he made working for tabloids in Britain. Stevens was in his early thirties when he moved to Florida. He bought a red Chevy pickup truck, and he put a CB radio in it and pasted an American-flag decal in the back window and installed a gun rack next to the flag. He didn't own a gun: the gun rack was for his fishing rods. Stevens spent a lot of time at lakes and canals around south Florida, where he would spin-cast for bass and panfish. He often stopped to drop a line in the water on his way to and from work. He became an American citizen. He would drink a Guinness or two in bars with his friends and explain the Constitution to them. "Bobby was the only English redneck I ever knew," Tom Wilbur, one of his best friends, said to me. Stevens's best work tended to get the Enquirer sued. When the TV star Freddie Prinze shot himself to death, Stevens joined two photographs into a seamless image of Prinze and Raquel Welch at a party together. The implication was that they had been lovers, and this sparked a lawsuit. He enhanced a photograph of a woman with a long neck: "Giraffe Woman." Giraffe Woman sued. His most famous retouching job was on a photograph of Elvis lying dead in his coffin, which ran on the cover of the Enquirer. Elvis's bloated face looked a lot better in Stevens's version than it did in the handiwork of the mortician. Robert Stevens was a kindhearted man. He filed the barbs off his fishing hooks so that he could release a lot of the fish he caught, and he took care of feral cats that lived in the swamps around his house. There was something boyish about him. Even when he was in his sixties, children in the neighborhood would knock on the door and ask his wife, Maureen, "Can Bobby come out and play?" Not long before he died, he began working for The Sun, a tabloid published by American Media, the company that also owns the National Enquirer. The two tabloids shared space in an office building in Boca Raton. on thursday, September 27th, Robert Stevens and his wife drove to Charlotte, North Carolina, to visit their daughter Casey. They hiked at Chimney Rock Park, where each autumn brings the spectacular sight of five hundred or more migrating hawks soaring in the air at once, and Maureen took a photograph of her husband with the mountains behind him. By Sunday, Stevens was not feeling well. They left for Florida Sunday night, and he got sick to his stomach during the drive home. On Monday, he began running a high fever and became incoherent. At two o'clock on Tuesday morning, Maureen took him to the emergency room of the John F. Kennedy Medical Center in Palm Beach County. A doctor there thought he might have meningitis. Five hours later, Stevens started having convulsions. The doctors performed a spinal tap on him, and the fluid came out cloudy. Dr. Larry Bush, an infectious-disease specialist, looked at slides of the fluid and saw that it was full of rod-shaped bacteria with flat ends, a little like slender macaroni. The bacteria were colored blue with Gram stain-they were Gram-positive. Dr. Bush thought, anthrax. Anthrax, or Bacillus anthracis, is a single-celled bacteriaPreston, Richard is the author of 'Demon in the Freezer A True Story' with ISBN 9780375508561 and ISBN 0375508562.