Death of the Fox: A Novel of Elizabeth and Ralegh 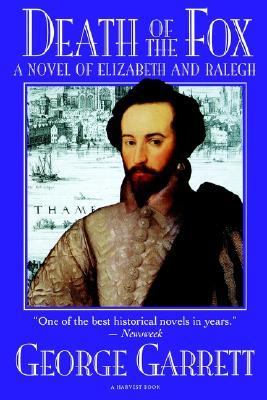 George Palmer Garrett, Jr. ( June 11, 1929 - May 25, 2008) was an American poet and novelist. He was the poet laureate of Virginia from 2002 to 2006. His novels include The Finished Man, Double Vision, and the Elizabethan Trilogy, composed of Death of the Fox, The Succession, and Entered from the Sun. He has worked as a book reviewer and screenwriter, and taught at Hollins University and, for many years, the University of Virginia. He is the subject of critical books by R. H. W. Dillard, Casey Clabough, and Irving Malin.George Garrett was born in Orlando, Florida on June 11, 1929. He attended the Sewanee Military Academy in Tennessee and The Hill School at Pottstown, Pennsylvania, graduating from the latter in 1947. He earned his BA from Princeton University in 1952, having matriculated in 1947 and having attended Columbia University in 1948-49. He also received his MA (1956) and PhD (1985) from Princeton.Garrett served in the United States Army Field Artillery (1952-55).He began his teaching career as an assistant professor at Wesleyan University, Middleton, Connecticut (1957-60). After one year as a visiting lecturer at Rice University, he became associate professor of English at the University of Virginia, Charlottesville, where he taught for five years before accepting a post as professor of English at Hollins College, Virginia, in 1967. In 1964-65 he was writer-in-residence at Princeton University. In 1971, he became professor of English and writer-in-residence at the University of South Carolina, Columbia, where he taught until 1973. From 1974 to 1977 he was senior fellow at the Council of the Humanities, Princeton University. He was then one year at Columbia University as adjunct professor (1977-78), one semester as writer-in-residence at Bennington College, Vermont, one semester at the Virginia Military Institute, and several years at the University of Michigan, Ann Arbor (1979-84). In 1984 Garrett was appointed Henry Hoyns Professor of English at the University of Virginia, the position in which he continued until his retirement in December 1999. Garrett's service to the arts was substantial. He served a two-year term as president of the Associated Writing Programs (1971-73). A charter member of the Fellowship of Southern Writers, he was the organization's vice-chancellor (1987-93) and chancellor (1993-97). Over the years, he edited several magazines and book series. He was Contemporary Poetry Series editor at the University of North Carolina Press, Chapel Hill, 1962-68; and Short Story Series editor at the Louisiana State University Press, 1966-69. From 1958 to 1971 he was United States poetry editor for Transatlantic Review and, from 1965 to 1971 co-editor of Hollins Critic. He was a contributing editor for Contempora and assistant editor of The Film Journal. With Brendan Galvin he edited Poultry: A Magazine of Voice; and he was fiction editor at The Texas Review.George Garrett's papers are housed in the Duke University Special Collections Library.Garrett, George P. is the author of 'Death of the Fox: A Novel of Elizabeth and Ralegh' with ISBN 9780156252331 and ISBN 0156252333.

2 from $1.50
Loading marketplace prices 2 copies from $1.50 How does the rental process work?
View more