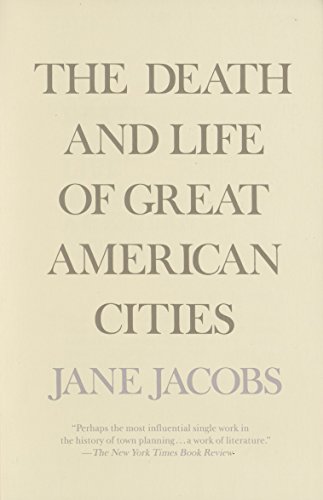 Foreword to the Modern Library Edition When I began work on this book in 1958, I expected merely to describe the civilizing and enjoyable services that good city street life casually provides-and to deplore planning fads and architectural fashions that were expunging these necessities and charms instead of helping to strengthen them. Some of Part One of this book: that's all I intended. But learning and thinking about city streets and the trickiness of city parks launched me into an unexpected treasure hunt. I quickly found that the valuables in plain sight-streets and parks-were intimately mingled with clues and keys to other peculiarities of cities. Thus one discovery led to another, then another--.Some of the findings from the hunt fill the rest of this book. Others, as they turned up, have gone into four further books. Obviously, this book exerted an influence on me, and lured me into my subsequent life's work. But has it been influential otherwise? My own appraisal is yes and no. Some people prefer doing their workaday errands on foot, or feel they would like to if they lived in a place where they could. Other people prefer hopping into the car to do errands, or would like to if they had a car. In the old days, before automobiles, some people liked ordering up carriages or sedan chairs and many wished they could. But as we know from novels, biographies, and legends, some people whose social positions required them to ride-except for rural rambles-wistfully peered out at passing street scenes and longed to participate in their camaraderie, bustle, and promises of surprise and adventure. In a kind of shorthand, we can speak of foot people and car people. This book was instantly understood by foot people, both actual and wishful. They recognized that what it said jibed with their own enjoyment, concerns, and experiences, which is hardly surprising, since much of the book's information came from observing and listening to foot people. They were collaborators in the research. Then, reciprocally, the book collaborated with foot people by giving legitimacy to what they already knew for themselves. Experts of the time did not respect what foot people knew and valued. They were deemed old-fashioned and selfish-troublesome sand in the wheels of progress. It is not easy for uncredentialed people to stand up to the credentialed, even when the so-called expertise is grounded in ignorance and folly. This book turned out to be helpful ammunition against such experts. But it is less accurate to call this effect "influence" than to see it as corroboration and collaboration. Conversely, the book neither collaborated with car people nor had an influence on them. It still does not, as far as I can see. The case of students of city planning and architecture is similarly mixed, but with special oddities. At the time of the book's publication, no matter whether the students were foot or car people by experience and temperament, they were being rigorously trained as anti-city and anti-street designers and planners: trained as if they were fanatic car people and so was everybody else. Their teachers had been trained or indoctrinated that way too. So in effect, the whole establishment concerned with the physical form of cities (including bankers, developers, and politicians who had assimilated the planning and architectural visions and theories) acted as gatekeepers protecting forms and visions inimical to city life. However, among architectural students especially, and to some extent among planning students, there were foot people. To them, the book made sense. Their teachers (though not all) tended to consider it trash or "bitter, coffee-house rambling" as one planner put it. Yet the book, curiously enough, found its way onto required or optional reading lists-sometimes, I suspect, to arm students with awareness of the benighted ideas they would be up against as practitioners. Indeed,Jacobs, Jane is the author of 'Death and Life of Great American Cities', published 1992 under ISBN 9780679741954 and ISBN 067974195X.