Day of Infamy, 60th Anniversary: The Classic Account of the Bombing of Pearl Harbor 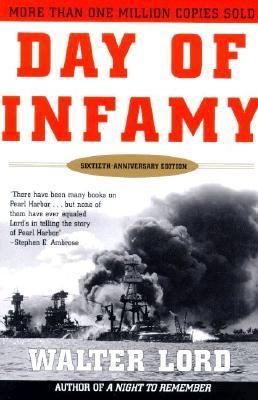 CHAPTER 1 "Isn't That a Beautiful Sight?" Monica Conter, a young Army nurse, and Second Lieutenant Barney Benning of the Coast Artillery strolled out of the Pearl Harbor Officers' Club, down the path near the ironwood trees, and stood by the club landing, watching the launches take men back to the warships riding at anchor. They were engaged, and the setting was perfect. The workshops, the big hammerhead crane, all the paraphernalia of the Navy's great Hawaiian base were hidden by the night; the daytime clatter was gone; only the pretty things were left -- the moonlight . . . the dance music that drifted from the club . . . the lights of the Pacific Fleet that shimmered across the harbor. And there were more lights than ever before. For the first weekend since July 4 all the battleships were in port at once. Normally they took turns -- six might be out with Admiral Pye's battleship task force, or three would be off with Admiral Halsey 's carrier task force. This was Pye's turn in, but Halsey was out on a special assignment that meant leaving his battleships behind. A secret "war warning" had been received from Washington -- Japan was expected to hit "the Philippines, Thai, or Kra Peninsula or possibly Borneo" -- and the carrier Enterprise was ferrying a squadron of Marine fighters to reinforce Wake Island. Battleships would slow the task force's speed from 30 to 17 knots. Yet they were too vulnerable to maneuver alone without carrier protection. The only other carrier, the Lexington, was off ferrying planes to Midway, so the battleships stayed at Pearl Harbor, where it was safe. With the big ships in port, the officers' club seemed even gayer and more crowded than usual, as Monica Conter and Lieutenant Benning walked back and rejoined the group at the table. Somebody suggested calling Lieutenant Bill Silvester, a friend of them all who this particular evening was dining eight miles away in downtown Honolulu. Monica called him, playfully scolded him for deserting his buddies -- the kind of call that has been placed thousands of times by young people late in the evening, and memorable this time only because it was the last night Bill Silvester would be alive. Then back to the dance, which was really a conglomeration of Dutch treats and small private parties given by various officers for their friends: "Captain Montgomery E. Higgins and Mrs. Higgins entertained at the Pearl Harbor Officers' Club . . . Lieutenant Commander and Mrs. Harold Pullen gave a dinner at the Pearl Harbor Officers' Club . . ." -- the Honolulu Sunday Advertiser rattled them off in its society column the following morning. Gay but hardly giddy. The bar always closed at midnight. The band seemed in a bit of a rut -- its favorite "Sweet Leilani" was now over four years old. The place itself was the standard blend of chrome, plywood, and synthetic leather, typical of all officers' clubs everywhere. But it was cheap -- dinner for a dollar -- and it was friendly. In the Navy everybody still seemed to know everybody else on December 6, 1941. Twelve miles away, Brigadier General Durward S. Wilson, commanding the 24th Infantry Division, was enjoying the same kind of evening at the Schofield Barracks Officers' Club. Here, too, the weekly Saturday night dance seemed even gayer than usual -- partly because many of the troops in the 24th and 25th Divisions had just come off a long, tough week in the field; partly because it was the night of Ann Etzler's Cabaret, a benefit show worked up annually by "one of the very talented young ladies on the post," as General Wilson gallantly puts it. The show featured amateur singing and dancing -- a little corny perhaps, but it was all in the name of charity and enjoyed the support of everybody who counted, including Lieut. General Walter C. Short, commanding general of the Hawaiian Department. Actually, General Short was late. He had been trapped by a phoneLord, Walter is the author of 'Day of Infamy, 60th Anniversary: The Classic Account of the Bombing of Pearl Harbor', published 2001 under ISBN 9780805068030 and ISBN 0805068031.